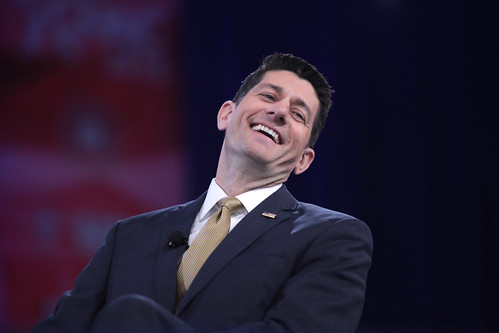 House Speaker Paul Ryan announced on Wednesday that he won't seek re-election to his Wisconsin First Congressional District seat. Facing a serious challenge from two Democrats -- Randy Bryce and Cathy Myers -- he may have worried that he couldn't win re-election. But he certainly knows that the Democrats may win a majority of House seats in November, which would mean that he would lose the Speaker's gavel. The 48-year old Ryan is one of a record number of Republican incumbents, many from once-safe GOP districts, who recently decided to retire rather than risk defeat. Ryan's exit makes it likely that more Republican lawmakers will follow suit.

Ryan's demise is quite remarkable, given his trajectory as the Republican Party's up-and-coming star. First elected in 1998 at age 28, making him the chamber's second-youngest member, he rose quickly through the ranks, becoming the chair of the House Budget Committee. He went on to serve as Mitt Romney's vice-presidential running mate in 2012 and later headed the House Ways and Means Committee.

In 2015, Ryan orchestrated a successful campaign for Speaker, claiming that he'd be a bridge-builder between the so-called "establishment" and "Tea Party" wings of the Republican Party -- the only guy who could save the GOP from self-destruction. But during his tenure as Speaker, the party's right wing grew bolder -- with Ryan's support.

Reluctantly tethered to President Trump, he never figured out how to join forces with the erratic president to craft a legislative agenda. His only signature accomplishment as Speaker was passage of the regressive tax bill. On other matters, such as repealing Obamacare or devising a conservative anti-poverty plan, Ryan's leadership was a total failure. Only in the wacky world of the modern Republican Party could Ryan be seen as a voice of reason or even, according to the party's Tea Party wing as "too far left," as the New York Timesreported in 2015 when he was campaigning for Speaker.

As part of that campaign, Ryan carefully cultivated the image of being a serious "thinker" and "policy wonk" and, for the most part, the mainstream media took the bait. When Romney introduced Ryan as his running mate in 2012, he described the Wisconsin Congressman as the "intellectual leader of the Republican Party." In the conservative magazine Commentary, James Pethokoukis wrote that "It's probably safe to assume that no elected official in America understands the ins and outs of the labyrinthine U.S. budget the way Paul Ryan does."

Endorsing Ryan's self-image as a broker between the GOP's major factions, New York Times columnist Ross Douthat described him as a "moderate conservative." But it is hard to imagine attaching the words "moderate" or "moderate conservative" to Ryan on any issue except his clothing preferences and his haircut.

Let's start with Ryan's outrageous hypocrisy. Ryan worships at the altar of novelist Ayn Rand, the philosopher of you're-on-your-own selfishness, whose books have been required reading for his Congressional staffers. Like Rand, he consistently demonizes people who improve their lives with the help of government. Ryan seems to be unaware of how much his own family and his own financial success has been influenced by "big government."

Despite Ryan's persistent attacks on government spending, his family's construction business has been anchored in building roads on government contracts. Despite his worship of private-sector entrepreneurs, he's spent his entire career as a government employee. Despite being a crusader against anti-poverty programs, Ryan is a millionaire who made his money the old-fashioned way: by marrying a woman who inherited a fortune.

In his speech to the GOP convention in Tampa in 2012, where he accepted Romney's invitation to join the GOP ticket as its vice presidential candidate, Ryan told a story about how, after his father's death, his mother "got on a bus every weekday for years, and rode 40 miles each morning to Madison." Ryan said:

"She earned a new degree and learned new skills to start her small business. It wasn't just a new livelihood. It was a new life. And it transformed my Mom from a widow in grief to a small businesswoman whose happiness wasn't just in the past. Her work gave her hope. It made our family proud. And to this day, my Mom is my role model."

Ryan meant this as a celebration of his mother's lift-herself-by-her-own-bootstraps spirit. He didn't seem to realize that the bus was a public service, that the road was built and maintained by government, and that the University of Wisconsin in Madison is a public institution.

Yet Ryan released budget plans to slash funding for public education, roads, and public services that are the investments we need to lift people out of poverty and strengthen our economy.

Reporters seemed bamboozled by Ryan, who has claimed to be a both a budget expert and something of a social philosopher. But he turned out to be just a slick talker who appears to have flunked basic math in high school or college, because his budget numbers never add up.

During the 2012 campaign, reporters kept asking Ryan to explain his draconian budget, but he could never provide a coherent answer. His stump speech was little more than warmed-over babble about the evils of "big government," the importance of being "self sufficient" and the dangers of people becoming dependent on government instead of lifting oneself up by one's bootstraps.

Peter Dreier is E.P. Clapp Distinguished Professor of Politics, and director of the Urban & Environmental Policy program, at Occidental College. His most recent book is  The 100 Greatest Americans of the 20th Century: A Social Justice Hall of Fame  (Nation Books). Other books include: Place Matters: Metropolitics for the (more...)
Related Topic(s): Hypocrite; Paul Ryan; Paul Ryan Budget Plan; Poverty; Republican; Resignation, Add Tags
Add to My Group(s)
Go To Commenting
The views expressed herein are the sole responsibility of the author and do not necessarily reflect those of this website or its editors.