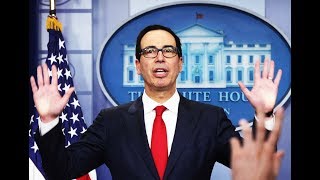 Mnuchin: It's Very Hard Not To Give Tax Cuts To The Wealthy
(Image by YouTube, Channel: The Young Turks)   Details   DMCA

Selling the Trump-Republican tax plan should be awkward for an administration that has made patriotism its central theme.

That's because patriotism isn't mostly about saluting the flag and standing during the national anthem.

It's about taking a fair share of the burden of keeping America going.

But the tax plan gives American corporations a $2 trillion tax break, at a time when they're enjoying record profits and stashing unprecedented amounts of cash in offshore tax shelters.

And it gives America's wealthiest citizens trillions more, when the richest 1 percent now hold a record 38.6 percent of the nation's total wealth, up from 33.7 percent a decade ago.

The reason Republicans give for enacting the plan is "supply-side" trickle-down nonsense. The real reason is payback to the GOP's mega-donors.

A few Republicans are starting to admit this. Last week, Gary Cohn, Trump's lead economic advisor, conceded in an interview that "the most excited group out there are big CEOs, about our tax plan."

Republican Rep. Chris Collins admitted that "my donors are basically saying, 'Get it done or don't ever call me again.'"

Republican mega-donors view the tax payback as they do any other investment. When they bankrolled Trump and the GOP, they expected a good return.

The biggest likely beneficiaries are busily investing an additional $43 million to pressure specific members of Congress to pass it, according to The Wall Street Journal.

They include the 45Committee, founded by billionaire casino oligarch Sheldon Adelson and Joe Ricketts, owner of the Chicago Cubs; and the Koch Brothers' groups, Americans for Prosperity and Freedom Partners.

How do you think they got so wealthy in the first place?

Related Topic(s): Corporations; Republican; Taxes; Trump Tax Plan, Add Tags
Add to My Group(s)
Go To Commenting
The views expressed herein are the sole responsibility of the author and do not necessarily reflect those of this website or its editors.