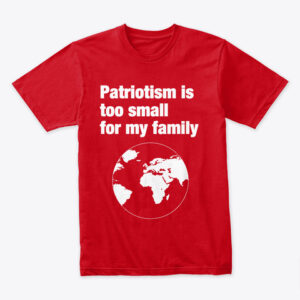 Ending bigotry has gone mainstream among the enlightened people of the developed world.

Did you spot the acceptable bigotry in that sentence?

We're against racism, sexism, and more kinds of bigotry than I could ever list.

But the 96 percent of humanity that's not within the United States is hardly worthy of concern.

On the Fourth of July I'm expected to celebrate a bloody, moronic, hubristic, and laughably failed attempt to take over Canada that instead got the White House burned, because at a battle in Baltimore lots of people died yet a flag survived, and somebody who owned other human beings as slaves wrote a poem glorifying the murder of people who dared to escape from slavery or who happened to be Muslims.

Seriously, can you? If you go to a supposedly national park in the United States you have to pay to get in, because only Evil Socialists tax their billionaires, and the money for getting in the park goes to provide tanks and jets and weaponry for a fascist parade in Washington D.C. openly celebrating profiteering off death, which is now carried on with zero shame. And if you were to let people into the national parks for free on condition that they were able to name all the nations the United States had bombed in the previous year, not a dime in funding for the patriotic trumparade threat to the world would be lost.

Please take your good patriotism or proper nationalism and stick it where you've stuck homophobia and ageism and religious bigotry. Don't you love your family? Your neighborhood? Your town? Your region? Of course you do, but where are the flags and songs and weapons parades to prove it? You don't need them, do you? Because you don't need to be conditioned to support mass murder on behalf of your family, neighborhood, town, or region.

Someone recently told me that my effort to get a statue glorifying genocide taken down was suspect because I was "white." Yet the same person, like every other person in the United States, would almost certainly have rendered news of a massive bombing of Iran by the U.S. military thusly: "We just bombed Iran." There's not supposed to be a "we" undivided by the stupidest possible means. We're supposed to be divided and conquered by appearance and culture. But the world's greatest criminal enterprise is supposed to unite us (and one-and-a-quarter trillion of our dollars each year) in the cause of Small Gummint and the liberty to do unto others before they can do it unto you.

Those kids in concentration camps near the U.S.-Mexico border are my family. The rightful president of Honduras, thrown out ten years ago in a coup the United States supported and supports, is in my family. The thugs who orchestrated the coup are my family too. Nancy Pelosi, who apparently believes nothing short of withholding a "campaign contribution" from her political party is impeachable, is my family too.

Families sometimes have discord, disagreement, and conflict. Families don't solve their conflicts with hellfire missiles. Former presidents who joked about murdering their daughters' boyfriends with predator drones are in our family too. The leader of North Korea is in our family. The people of his country who would rather not die in a nuclear apocalypse are in the same human family. The rest of the world's people who'd rather not die in a nuclear winter created in Korea are also family members. And those in the United States who are so ridiculously misinformed as to suppose that nuclear explosions in Asia would not effect them, and that the horror of having murdered a million people would not effect them those beautiful men and women are us; they live in our home.

David Swanson is the author of "When the World Outlawed War," "War Is A Lie" and "Daybreak: Undoing the Imperial Presidency and Forming a More Perfect Union." He blogs at http://davidswanson.org and http://warisacrime.org and works for the online (more...)
Related Topic(s): Patriotism, Add Tags
Add to My Group(s)
Go To Commenting
The views expressed herein are the sole responsibility of the author and do not necessarily reflect those of this website or its editors.