Time for another swing at a Senility Defense! 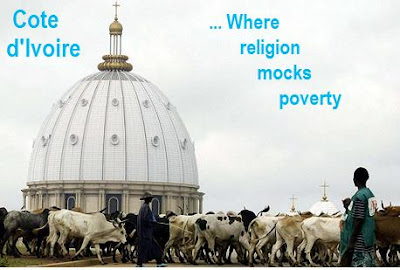 Since Pat didn't say anything about Japan's spirit-of-the-anti-Christ religions causing earthquakes or the tsunami, I figured he had lost his mojo in the God's Ambulance Chasers' department. Last January, when the "snowpocalypse" hit the country and stopped dead all air travel, Robertson chimed with his explanation that it was "God's way of preventing gays from doing something gay." So I thought that Japan's disasters were a natural. I waited and waited in vain.

Hooray! He may not have come through with Japan, but he certainly was right on target with the conflict in Cote d-Ivoire! That's my man!

It is unfortunate that the African nation, Cote d'Ivoire (Ivory Coast), sounds so much more romantic than it really is. Like a beautiful stage set, the country's name fronts squalor and corruption, horrendous hypocrisy and  egotism.

The government of Cote d'Ivoire has caught the same democracy virus that it's northern African neighbors have and the tension is, to say the least, high.

The finale of Gbagbo's 10-year claim on Ivory Coast is playing out much like the beginning. The 65-year-old strongman, who made an art of staying in power years past the end of his legal mandate, is now pushing the envelope, fighting for each day, even each hour.

That was several hours ago. By now, however, Pat Robertson and Gbagbo's supporters here in the U.S. have heard that Gbagbo has been negotiating his surrender, talking about security with U.N. and French forces. The new President, Alassane Ouattara, is also anxious about his security. Gbagbo has a reputation - made ever more evident at the number of civilians killed during the last days of unrest.* But this is a reputation Pat Robertson choses to ignore.

Watch below how Robertson spins his way through the murky waters of despotism, trashes Muslims (Africa will have a "Ring of Sharia Law"), the French, the MSM and calls Gbago a good Christian man. Pat's never better when he's at his most senile. Notice too, how the station gets in a dig at Obama by positioning the announcement of his 2012 candidacy immediately afterward.

The Ties That Bind - To The Christian Right

Gbagbo, along with his influential wife, Simone, are evangelical Christians who are known for lacing their speeches with religious rhetoric. "God is leading our fight. God has already given us the victory," Simone Gbagbo, who is both first lady and politician in her own right, said at a rally in January. Both Gbagbos have attended the National Prayer Breakfast, a big annual Washington event run by the secretive Christian group known as the Family, or the Fellowship.