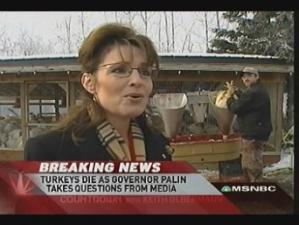 Turkey Terrorist does not register high on most best-paid job surveys. It scores worse on applications. It is a specialty, however; in fact, one of the most challenging skills out there, which explains why so few trade schools offer training. Perhaps job-seekers, or potential Part-Time Indians, are daunted by the winged-warrior demands of poultry-napping. We undoubtedly are getting soft today, surfing in a Microsoft and Styrofoam world. Inexplicably, however, feather pillows are going out of style.

Nevertheless, some will take up the mantle. There are right ways and wrong ways to go about it--some might even say hard right. The one thing I have learned is never turn your back on the turkey. Nor hurt him. The power of a single gobbler, as in Sarah Palin's case, can wreak political havoc. Even change the course of history.

Regarding poultry-deployment, even though I was number one in my class, I was not looking for work. My resume stood for itself. After fleeing Bingen, Washington, with the FBI sniffing not far behind, and with money in my pocket, I crossed the Columbia River to Oregon, and headed west.

Hitching a ride, I was reading Tim O'Brien, celebrated Vietnam veteran and author of If I Die in a Combat Zone, with whom I in later years discussed TurkeyMan Travesties. Noting his description of his hometown Worthington as the Turkey Capital of the World, along with a few historical Indian references, I was not sure he was my ally. As I passed Memaloose Island, where the Indians used to bury their dead on the Columbia River, I saw on page 12, his description of the town:

To the north was Pipestone, and the annual Hiawatha Pageant. To the west was Luverne and Indian burial mounds.

Norwegians and Swedes and Germans had taken the land from the Sioux. The settlers must have seen endless plains and eased their bones and said, "Here as well and anywhere, it's all the same."

All the same? O'Brien makes no moral judgment. There seemed to be no conflict. He just says endless plains were taken from the Indians, implying the land lay in such abundance that Indians perhaps were simply tired of it, and gave it away, an act of noblesse oblige, and settlers obliged. Like somebody takes tea, if offered.

Not too Indian-friendly, it seemed, but when I got to the Celebrated Minnesota Massacre part, I wondered why anyone would celebrate an Indian slaughter. To my surprise, the 1857 massacre involved a massacre of 35-40 white settlers, as well as the kidnapping of 4 white women, by Oglala Sioux Chief Inkpaduta, for the usual reasons: settlers had killed his brother and family. Inkpaduta's son, Grey Earth Track, later claimed he had killed Custer in the 1876 Battle of the Little Bighorn, and taken his horse Vic. 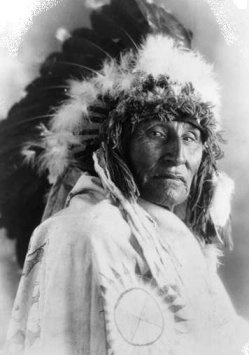 Other Indians also claimed the honor: White Cow Bull, a 28-year-old Oglala Sioux Warrior who died in 1942 at age 94.

Perhaps, for O'Brien to describe the distant-related Spirit Lake massacre, in which whites died, as a celebrated event, O'Brien, a master of wry meaning, is being wearily sarcastic. Or maybe he has my back. Probably, I am pecking at straws.

Unlike Custer's coup, few Indians have stepped forward to claim TurkeyMan honorariums. Apparently, Turkey-napping is only a Part-Time accomplishment. So far, I am a warrior alumni by default--a compilation of crazed accusations and inconclusive journalistic derivations.

STAY IN THE KNOW
If you've enjoyed this, sign up for our daily or weekly newsletter to get lots of great progressive content.
Series: "TurkeyMan: The Absolutely True Story of a Part-Time Indian Terrorist"

A Stroll Along the Russian-Chinese-North Korean Border