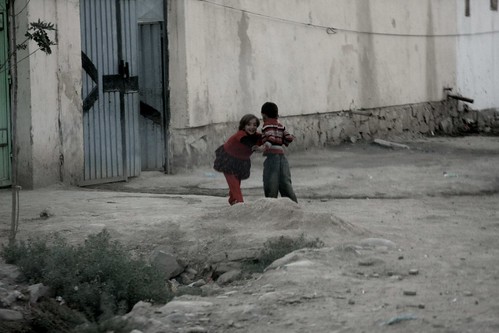 This piece was first published in Counterpunch. The following parts will appear in the coming weeks.

This an introduction to a series on contemporary youth resistance in the United States. The series will focus on youth actions, groups, theories, tactics, and figures, mostly in the Northeast region of the United States, engaged in the resistance and struggle for a more equal, open, and sustainable future, on specific social and political issues that have passed, are ongoing, upcoming, and usually all three.

Psychology of Destruction in the Political and Social Mind

The Republican and Democratic parties have recently struggled to relate to voters (and nonvoters), mostly through the mainstream narratives about and public relations tactics used in the election season. The two parties seem to have no plan to change course before or when the structures of consolidated power begin -- more directly in more of our everyday lives -- to sacrifice the population to sustain themselves for profit, with the potential to collapse civilization through endless war, economic uncertainty, environmental destruction, and the stripping of privacy and civil rights (See here, here, here and here, here, and here).

The Republican Party had nowhere interesting, creative, new, or imaginative to go before Trump exploded onto the scene. Now they have been compelled to ride the Trumpist wave, fated to crash down on all of us, most importantly our children. When that specific tide recedes, the Republican Party will likely be empty. It is the social, political, and parental duty of the population -- most broadly any member of the 99 % of economic society -- to rise up against the crash-down, colliding the immovable and unstoppable.

The Democratic Party has grown increasingly elitist and distanced from the meanings of the rhetoric it employs and the population it needs and that needs it. An interesting anecdote on this reality can be found in the exchange between Julian Assange and John Podesta on Twitter in October 16', after Podesta's emails were leaked by Wikileaks. Podesta's response to the incident was to troll Assange on Twitter by comparing his own high culture living conditions and meals to those of Assange's, who remains indefinitely detained in the Ecuadorian Embassy. The nomination of Hillary Clinton and the repeated betrayal of civil and environmental rights, as well as peace, also demonstrated the Democratic Party's elite distance from the population. The Democratic Party has lost the ability to both self-reflect and imagine new political visions; it only knows how to be told where to go, usually only by the far right and center-right business community, only sometimes knows how to listen to anybody else and is almost always incapable of responding.

The Democratic Party's irrevocable decline means that no major, moneyed, diverse, and powerful electoral organization exists across the country to represent the interests of the poor, progressives, people of all colors and religions, and the planet, in a consistently effective way. In short, we are sending our children into a massive political and electoral vacuum.

We live in a society of consumption through distance -- from our food to our shopping, our communication and our wars, we increasingly do not touch the things we use, hear our conversations, live our experiences. The more rapidly inequality and technology accumulate, the more this distance will grow from our work, the entertainment we absorb, the politics to which we relate -- the social, psychological, and political circumstances that determine our lives. This distance is essentially Marx's idea of alienation on a mass, accelerated, modern scale. Everything we want and aspire to, we are raised to believe, is somewhere, someone, something else, something that we are not and do not have, someone else we must me be like, something we must buy, somewhere else we must go (usually an inaccessible place in a screen), something away from us and beyond our own insignificant, unspectacular, hustle and bustle lives. We are destined to sacrifice who we are for a larger, constant, thoughtless social order, distanced from everything, first and foremost from ourselves. The American population is more structurally divided and yet simultaneously comes together more necessarily, urgently, and spontaneously in moments of accumulated uncertainty and distress, as The Occupy Movement began to suggest -- a movement in which approximately thirty five percent were not Democrats.

With voter turnout declining and the policies of both parties becoming increasingly detached and outdated -- as, among millions of other anecdotes, the bromance between Clinton and Kissinger illustrated -- Trump is a last cry from an economic, political, and social system ready to implode -- ready for other possibilities as well, but we must acknowledge that it is ready to implode, that the accumulation and consolidation of the corporate community's power over its own interests has long been on a dangerous collision course with the security and interests of the population and the planet.

Trump's electoral explosion and sweep across the country was not a movement; there was no movement away from the corporate state, but a rapid absorption into it. Painting the government as corrupt in a narrative riddled with contradictions, Trump has been able to vaguely but constantly prop up the multinational corporate community as the great alternative to the corrupt government, most blatantly in his cabinet picks -- an ingenious power-grabbing narrative, since the government and the American multinational corporate community are now effectively the same force, the primary reason the government is deeply corrupt in the first place. The Trumpist's solution to every problem is more of the source of the problem. They make narrow outgrowths, distortions, mechanisms and symptoms of the establishment look like the counterculture to it and the solutions for change away from it. The Tea-Party Movement has the same weakness.

From the beginning of Trump's campaign to the latest headline, the Trumpists have easily distorted and diverted the rebellion impulse into a hyper-drive expansion of every conflict striking at the heart of the American poor, the rights of citizens both at home and abroad, and the planet. The Trumpist malleability of language, clarity, spectacle and sensation redundantly replace fact, meaning, responsibility and consequences as tools of statecraft every day.

Matthew Vernon Whalan is a writer and contributing editor for Hard Times Review. His work has appeared in The Alabama Political Reporter, New York Journal of Books, The Brattleboro Reformer, Scheer Post, The Manchester Journal, The Commons, The (more...)

Related Topic(s): Anti-war; Children; Community; Consumption; Future; Politics; Politics In Military; Protest; Psychology; Resistance; (more...) Responsibility, Add Tags  (less...)
Add to My Group(s)
Go To Commenting
The views expressed herein are the sole responsibility of the author and do not necessarily reflect those of this website or its editors.

Voting For Resistance, Voting for the Youth: Why the Green Party is the Party of the Future

What is a Terrorist? The Criminalization of American Dissent in the 21st Century

The Political Philosophy of Vision and Rebellion in the 21st Century