My guest today is Bob Koehler, author, activist and peace journalist. Welcome back to OpEdNews, Bob.

Joan Brunwasser: I'm sure that many of our readers are not yet familiar with your most recent piece, Change is Coming. Let's bring them up to speed. What precipitated it?

Bob Koehler: Hi Joan; it's good to be back. What precipitated this week's column? Oh, the last 10,000 years or so of human violence ....More specifically, of course, it was the March for Our Lives events all across Planet Earth, including one here at Union Park in Chicago, which I attended. Like so many of us, I've been deeply stirred by the activism that has emerged in this country since the horrific Parkland shootings last month -- as though enough is finally enough, and energized young people are not going to let go of this issue till something changes. I want to give my voice over to this movement.

Am I Next?
(Image by Kitchener Conestoga Greens)   Details   DMCA

JB: So, what do you see that's different this time?

BK: Something is stirring up the national spirit. One analysis of "why now?" that makes a pragmatic point is that the Parkland murders occurred in an affluent community, that is, a community that cannot be dismissed, relegated to the margins of public compassion, or written off, ho hum, as "them." So when the young survivors of this latest mass shooting began organizing and speaking out so articulately, they conveyed a stunning reality: This could happen anywhere. It could happen to your children. To their immense credit, the Parkland teens reached across the line to young people of color and created a movement that transcended any artificial division. A true national movement emerged out of this coming together. With the ascension of Trump to the presidency and all the chaos and unconcealed racism that has come with it, an enormous number of people in this country had already been aware that our social structure is in danger of collapse. I believe, as young people across the country speak out about the violence they have personally endured, people just plain get it in a way they can no longer avoid facing. 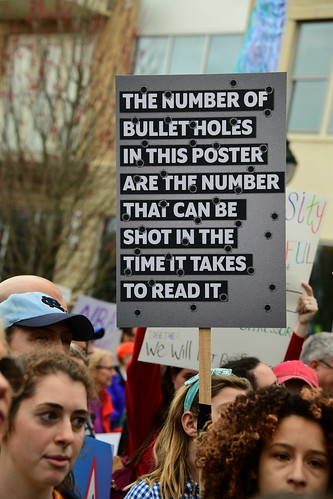 JB: How does this tie in with the Women's Marches, both last year and this? Or doesn't it?

BK: I certainly think they're connected. Maybe the issues the two marches focus on differ superficially, but they both address violence, marginalization, dominance -- a problematic, unfair social structure. Both movements are about people uniting in compassion to create a world where everyone is safe and has a chance to live a full life. And the larger unity beyond that pulls in the movement to address climate change and create an environmentally sustainable society. I hope the next step is that such principles finally gain political traction.

You Don't Need a Gun to Be Powerful (left), You Can Put a Silencer on a Gun But Not on Me (right)
(Image by Mobilus In Mobili)   Details   DMCA

JB: Tell us more about the march itself. You participated, correct? I haven't heard you so enthused since the huge Chicago Sanders rally in 2016. Am I misremembering?

BK: Thousands of people were jammed into tiny Union Park, two miles west of the Loop. The morning was bitter cold. I put on both a sweater and my winter jacket, and did not regret being dressed so protectively. I was near the back of the crowd, but the organizers presented the event on a giant screen, so I could see the speakers close up. One young person after another addressed the crowd with a personal story about violence in their lives. In between speakers and performers, including rap and poetry, the crowd would chant "vote them out!" The participants were diverse in age, race, gender and everything else. As I noted in my column, the creative diversity of the signs people held was extremely compelling. Some of them (which I enjoyed, of course) were borderline obscene, like "Truck Fump" and "FCK the NRA." This was completely the opposite of what I call "spectator culture," where the role of the American public is to watch TV, shop, cheer for their team and allow themselves to stay trapped in a mental cage defined by the media, making minor choices on trivial issues and avoiding all serious thought about the future or who we are as a society. The young speakers broke though this barrier with passion and anger. 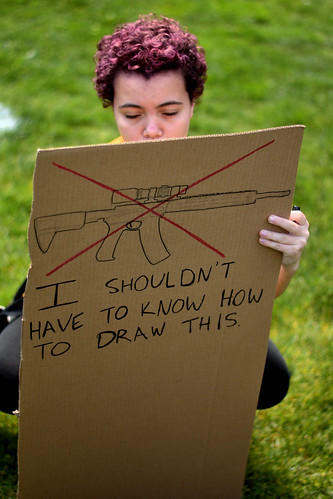 sign reads: I shouldn't have to know how to draw this [picture of an AR-15 semi-automatic]
(Image by Tom Hilton)   Details   DMCA

JB: There's a tremendous amount of energy out there, largely fueled by outrage. We've all seen this before: Occupy, the Women's March and now. Are you worried this force will gradually dissipate into nothingness? How do we keep that from happening?

BK: It won't -- it can't -- dissipate into nothingness, though it can disappear from the media for a while. If that happens, if the size of crowds at major public events diminishes for a while, that's no reason to give up hope. The 2018 elections are coming up. "Grab 'em by the midterms," one of the signs at the Chicago rally proclaimed. Political involvement -- holding pols accountable -- may be the next major focus of this movement. There's always some way to stay involved. Write, talk, blog, communicate with your reps. Never give up hope. The terrible irony is that it takes the deaths of schoolkids to wake people up, to inflame and empower a movement for change. I hope people can feel empowered simply by the need to prevent the next killing. This keeps me focused.

Related Topic(s): Bob Koehler; Change; Chicago; Columnist; Community; Interviews; March; Parkland Massacre; Peace; Racism; (more...) Rally; Rally; Shooting; Survivor, Add Tags  (less...)
Add to My Group(s)
Go To Commenting
The views expressed herein are the sole responsibility of the author and do not necessarily reflect those of this website or its editors.

STAY IN THE KNOW
If you've enjoyed this, sign up for our daily or weekly newsletter to get lots of great progressive content.
Series: "students"