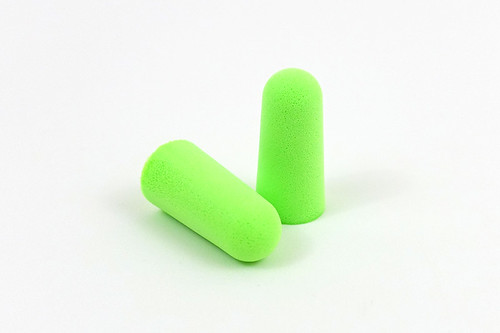 Pair of Moldex Mellow 6800 Ear Plugs
(Image by sleepsugar.com)   Details   DMCA
"I don't know that we've done enough to be deeply engaged with our families who have vastly diverse experiences"
- Tanya Franklin

The Community Advisory Committee (CAC) advises the LAUSD Board of Education to advocate for effective Special Education programs and services. Its members are appointed by the board and include parents, students, teachers, and other champions for students with disabilities. The committee operates under the belief "that effective partnerships between families, community members and schools can help children with exceptional needs to achieve their highest potential."

At the February meeting of the CAC, a motion was considered stating that "the ongoing pandemic has caused unprecedented disruptions to our children's education" and that "the effects have been especially brutal for children with special education needs." Noting that "stakeholder input is crucial as the district maneuvers through the continued physical closure of our schools and plans are made for the eventual return to school sites," a request was made for the CAC Chairperson to "send a letter to the BOE requesting that LAUSD School Board reinstate the Special Education Committee." It was the CAC's hope that resuming meetings of this committee would "allow families of students with disabilities to have a place to come and provide a strong voice for our students." 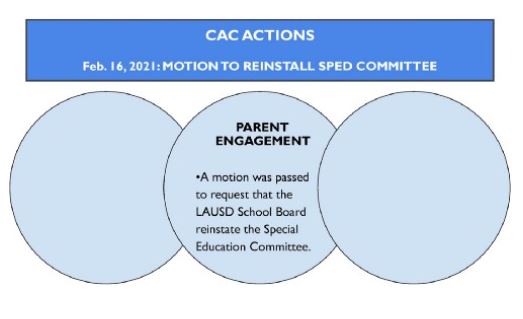 This motion was passed by the CAC with a vote of 18-0-1. The one vote to abstain was by Lisa Mosko, who is the committee's chairperson. She is also a director at Speak Up, a pro-charter school group founded to support board member Nick Melvoin's candidacy and funded in part by the Walton Family Foundation. This is the same group that used bigotry to block the appointment of Jackie Goldberg to the LAUSD Board and had a leader who posed as Superintendent Austin Beutner on Twitter.

When presented with this request at the Committee of the Whole meeting on February 23, 2021, LAUSD Board President Kelly Gonez indicated that she may be reconsidering her decision to keep the Special Education Committee silent for the rest of the school year. Gonez specifically stated that she has "had some conversations with Board Member Schmerelson about resuming the Special Education Committee" and said that they may have a "substantive update" within the next few weeks." However, nothing was said about the Parent Engagement Committee and as of the writing of this article, a meeting of this committee does not appear on the board's calendar.

As the public awaits meetings of the Parent Engagement Committees to resume, pressure continues to build. Last week the Northridge West Neighborhood Council (NWNC) became the latest community representative to request "that the Parent Engagement and Special Education be allowed to resume work". Additionally, they stated that meetings of these committees should "be held during after-work hours to allow for more participation."

In a letter to members of the Los Angeles City Council's Arts, Parks, Health, Education, and Neighborhoods Committee, the NWNC noted that the Special Education and Parent Engagement Committees "are essential for providing a means for...feedback to be given to the people elected to represent the community's interests." If you agree with this sentiment and would like to make your opinion known, you can contact Board President Gonez's office at either (213) 241-6388 or Kelly.Gonez@lausd.net.