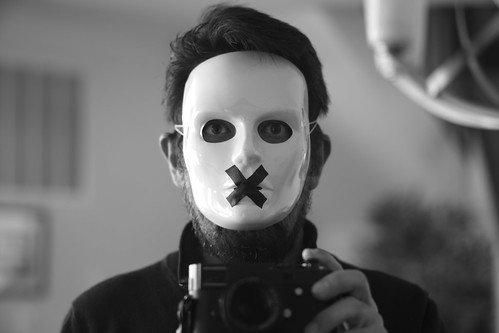 Silenced...
(Image by tjmills1520)   Details   DMCA
ponsible for the board president to state in her official website that one of the issues she is working on is 'Engaging Parents and Families' and at the same time deny parents the opportunity to participate in the process"
- LAUSD Candidate Marvin Rodriguez

As the COVID-19 shutdown of school facilities rapidly approaches its first anniversary, increasing numbers of parents are getting restless. The crisis has exposed the deep technological divides between different areas of the district and exacerbated the educational inequities between rich and poor. Even the best efforts of the most dedicated teacher cannot undo decades of neglecting infrastructure. The crisis has prevented many children with special education needs from receiving the services that they are entitled to, causing some students to regress. Frustrated that their concerns are not being addressed, some parents have sued the district demanding that the district ignore the obvious risks and reopen classrooms before the health threat has subsided.

An ongoing dialog between parents and the district could have prevented this antagonism. Instead, Superintendent Beutner, who has no professional experience in education, pontificated to parents, telling them how the LAUSD would provide services during the crisis. These were often based on Beutner's will to push his ideology and lacked any connection to real-world conditions. Had the district actually listened, they would have known that parents wanted to be assured that there were already plans in place for after the crisis was over to help children who had lost ground. Without this assurance, they were forced into the courtroom.

Prior to the rapid shutdown of district facilities last March, one of the ways that the district obtained feedback from its stakeholders was the Parent Engagement and Special Education Committees. In the chaos of the closure, meetings of these committees were understandably suspended as the LAUSD rapidly transitioned into distance learning. Ten months later, distance learning has become the new normal, but the meetings of these committees have not returned. Board President Kelly Gonez, who was elected with the support of the charter school industry, says that she does not intend to reconsider reinstating any committees until after the end of the semester.

After Gonez first made her intentions to silence parent engagement clear, numerous parents wrote to Gonez to demand an immediate reinstatement of these two committees. She responded with a form letter that doubled down on her decision without taking their concerns into account. It was clear that the new Board President had no intention of listening to her constituents.

Last week, the Northridge East Neighborhood Council followed the recommendation of its Education Committee and unanimously passed a motion that requests "that the LAUSD encourage stakeholder participation by reinstating the Parent Engagement and Special Education Committees." Other neighborhood councils are expected to take up similar resolutions in the coming months.

Gonez is up for reelection next year and, Marvin Rodriguez, her first declared opponent in the race, "fully supports the reinstatement of the Parent Engagement and Special Education Committees." This is not surprising as his candidacy is based on the need to "engage parents and create a partnership with them in the service of our children." He also says that "it is irresponsible for the board president" to claim that she is focusing on "engaging parents and families" while "denying parents the opportunity to participate in the process with her decision to decline to reinstate these committees."

If Gonez is uninterested in engaging with parents or understanding the needs of students with special education needs, then she has no obligation to participate in these two committees. Board Member Scott Schmerelson has already volunteered to do all the work so Gonez needs only to permit the committees to function. If she does not want to step up, she needs to get out of the way.