According to Nick Melvoin's Speak Up, School Board Candidate Marilyn Koziatek "leads the community engagement department at Granada Hills Charter, which includes parent engagement". As part of this role, Koziatek was asked by the California Charter School Association (CCSA) to comment on an article that the LA School Report was writing after "LA Unified's charter school oversight division... confirmed it [would] look into complaints about three independent charter high schools made by a parent whose daughter attends" Granada. The email described the parent as "a well-known gadfly." I take that as a compliment.

Sixteen minutes after the first email was received, the charter industry's trade association had apparently decided on a change in strategy. Without explaining why they no longer preferred that the story "not be negative", they were now telling the author of the proposed article that this was "a non-story and that we're not going to comment." They further instructed Granada that they "probably shouldn't bother either." Koziatek quickly submitted her response: "We will also not comment." So much for "parent engagement".

Given that Koziatek's salary is paid for with taxpayer funds, her work product should be a matter of public record. Having access to this information is the only way to understand if she is actually working to perform "community outreach" or if her primary responsibility is "fundraising" so that Granada can fulfill its governing "Board's desire to make the GHCHS Executive Director position one of the top compensated positions in Los Angeles." Was she actually engaging parents so they can work with the school for the benefit of students or was she part of the system that ignores the laws governing special education to force neighborhood children into an independent-study program? Did she work to ensure that parents were fully informed about their children's education or was she one of the administrators who ignored the requirements of the school's charter and buried the fact that conditions exist on the campus that are "a risk to the health and safety of... students, staff, and other individuals"?

Unfortunately, Granada is unwilling to let the public see how their taxes are being spent at the school and instead seems determined to delay responding to a California Public Records Act (PRA) request in any manner possible. First, they sought to limit the request to electronic records in order to avoid having their staff "collect and examine literally hundreds of thousands of pages of documents". When this was agreed to they sent a second letter demanding a deposit of $1,780 in order to extract, compile and redact information from their records. This directly violates the PRA, which specifies that public agencies may only charge to recover "direct costs of duplication". If members simply want to review the information that is in the possession of the public agency, then they are entitled to do so without charge.

As bad as it is to block access to public information, the accelerated charter schools have managed to take discouraging parent and community engagement to a whole new level. Under the language in their charter required by the LAUSD, their governing board meetings are subject to the Brown Act and are supposed to be open to the public. However, as stakeholders have descended on these meetings to protest the firing of a whistleblower, they have found new and creative ways to violate the spirit, if not the letter, of this law.

Michael Kohlhaas dot org reported in October how the board had delayed entry of the public by illegally requiring attendees to sign in before entering the meeting room. This obstacle allowed the charter school to successfully delay entrance by the public until after the required public comment period had been passed on the agenda. When the attendees demanded that they be given a chance to speak, the meeting was placed in the recess, which by definition means that all board activities are supposed to end. However, when the meeting was restarted it was announced that not only had the board continued deliberations behind closed doors, they had actually taken a vote.

For the December meeting, the charter school went further. In an apparent attempt to intimidate stakeholders, the school hired three uniformed security guards to watch over the meeting's attendees. Even worse, these guards were armed despite the fact that the meeting was held on school grounds. A staff member from the school reports that the security guard who is present at the school on a daily basis "has a permit to carry, but is not allowed to."

As they do their best to keep their operations away from public eyes, both schools continue to receive taxpayer money. It is time for the LAUSD to enforce the provisions in their charters that mandate conformance with both the California Public Records Act and the Brown Act. Additionally, they must appoint an LAUSD representative to each governing boar d to ensure the public is properly represented. 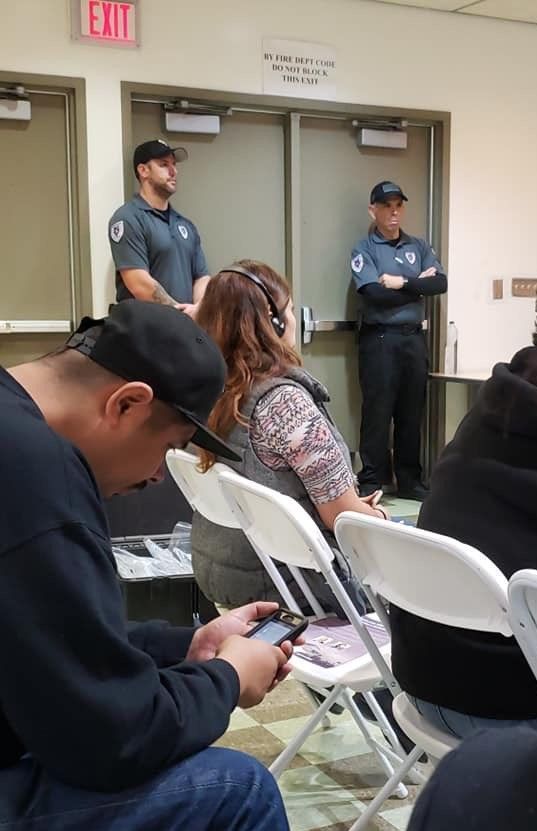