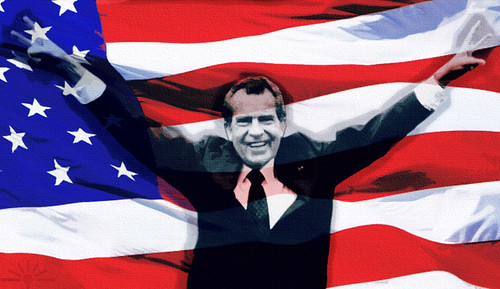 Pardon me? What's that you say?

There's talk of whether Trump will pardon himself, whether he'll resign, turn power over to Pence, and have Pence pardon him, or whether he's working on a backroom deal to make sure Congress and the DOJ are prohibited from investigating either him or his children? Another cover-up courtesy of one administration to another?

It's a familiar drill, perfectly legal and completely corrupt. It's why Democrats get away with grandstanding on recycled sound-bites like "no one is above the law." Chuck Schumer does it. Nancy Pelosi does it. Adam Schiff does it. Hillary Clinton does it. They all do it, and no one better than Barack Obama (here, here, here and here). Trouble is, once in office they renege. The guilty have suffered enough. There's more important stuff to do. The nation needs to "look forward, not backwards." In other words, no matter what is said publicly, political elites will never be held accountable for their wrongdoing. But questions remain. Doesn't this make a mockery of the law? Doesn't it expose the lie? If so, why keep repeating it? How did we get here?

Any serious examination of systemic lawlessness in the US must begin with Gerald Ford's pardon of Richard Nixon in 1974: "when the president does it, that means it's not illegal." At the time Ford defended his decision, telling a national audience it was the only way the country could "heal." Later reports suggest he must have known the so-called "healing argument" was little more than a con to help Nixon avoid prosecution. Ford denied any deal, but once he was confirmed as VP Nixon put him in charge of derailing the House's investigation into Watergate financing. What are the odds Ford, a professional politician and successful tax cheat, did not know his boss was at the center of a criminal enterprise, including obstruction of justice, abuse of power, contempt of Congress, misappropriation of funds and more?

Seriously, it was not a close call. In spite of Ford's obscurantism, neither the misconduct nor the solution were difficult for the public to understand. Over 60% were against a pardon. Nixon had broken the law. He should suffer the consequences just like everyone else. If healing the nation was the objective, clearly, in the public's mind, at least, applying the law equally and without bias was essential. Instead, thanks to friends in high places, Tricky Dick skated. He was free, while his well-documented wrongdoing went unpunished. And just like that one of the core principles of representative government shriveled to a cinder.

In his seminal essay, "Politics and the English Language" (1946), George Orwell explores the relationship between state power and the "vague," "imprecise" language it produces: "All issues are political issues, and politics itself is a mass of lies, evasions, folly, hatred, and schizophrenia." Three years later he publishes 1984. Had he waited on the essay he could've included "thoughtcrime," a technique similar to what Edward Herman and Noam Chomsky will later call "manufacturing consent." The point is the vagueness is intentional, the lack of precision strategic.

Consider the deceptive language employed by successive administrations below:

In 2001 President Bill Clinton defended his pardon of Marc Rich, the fugitive billionaire, writing in an op-ed that he'd granted it "because of [Rich's] contributions and services to Israeli charitable causes." It had nothing to do with the $450,000 donation to his library, or the $10,000 donation for his legal fees, or the $7,000 for tables and chairs. By the bye, the individual the former president was referring to had been indicted in 1983 on more than "50 counts of wire fraud, racketeering, trading with the enemy and evading more than $48 million in income taxes." Trading with the enemy? It appears Mr Rich attempted to make deals with Iran not long after the release of the 52 American hostages. Rather than stand trial, he fled to Switzerland.

Two years earlier Clinton repealed Glass / Steagall, saying he'd produced in its place "legislation that would not only spur greater competition, but also protect the rights of consumers." Look closely at the language. Most of it is intentionally vague. What is the nature of this spurring? Is "competition" necessary? Who are the "consumers" and which "rights" are being protected? Some of it is intentionally misleading: the entire oppositional clause. The repeal was never about protecting consumers' rights, people buying homes, for example. It was about turning Clinton's Wall Street cronies loose to fleece the nation, which, as has been thoroughly documented, is exactly what they did.

After Clinton W' and his gang of thugs came to power, and no administration in the history of the country abused language more than these folks, especially when it came to fomenting war with Iraq: Vice President Dick Cheney: "There is no doubt Saddam Hussein now has WMD"; Secretary of State Colin Powell: "Iraq has got laboratories, mobile labs to build biological weapons"; Defense Secretary Donald Rumsfeld: "We know where [the WMDs] are . . . around Baghdad, east, west, south and north somewhat"; National Security Advisor Condoleeza Rice: the aluminum tubes "are only really suited for nuclear weapons programs"; and then there's W' himself, the pre-Trump Trump: "A new regime in Iraq would serve as a dramatic and inspiring example of freedom for other nations in the region." According to the Center for Public Integrity, the Bushies told a whopping 935 false or misleading statements in their effort to win support for an illegal war. Over 460,000 Iraqi casualties. Over 4,000 US dead. More than $2 trillion spent. Not one of them prosecuted.

Speaking of failure to prosecute, President Obama's tenure in the White House was noteworthy for its consolidation of corporate power and increased military interventions, so one should expect the language to become even more detached from reality. And detach it does: Attorney General Eric Holder, "I am concerned . . . some of these institutions become so large it does become difficult for us to prosecute them"; Secretary of State Hillary Clinton, "I'm a progressive who likes to get things done"; Education Secretary Arne Duncan: corporate control of public education is a "movement for social justice"; Vice President Joe Biden: "the moment it started, I came out against the [Iraq] war"; and Obama, the dean of deceptive speech, "the TPP is the most progressive trade deal in history."

Every one of these statements is false, every one intended to convince the public up is down and right is wrong. "Who ya' gonna' believe," says Chicolini in Duck Soup, "me or your own eyes?" Note, as well, the causal development: official corruption leads to official lies to conceal the corruption, which leads to more corruption, which in turn requires the official lies become official policy to conceal future corruption. The short-term goal is to keep the perps out of jail, although, unfortunately, the long-term effects are even more damaging.

As these examples demonstrate, once state power is abused the violation does not magically disappear. It lingers, its poison metastasizing exponentially, spreading, expanding, moving from one set of villains to the next and growing more lethal with each move. Nixon had his "dirty tricks." Reagan / Bush ran foreign policy through an "off-the-shelf" gov't. Clinton swindled voters on every major piece of legislation he enacted. W' started an illegal war, while Obama tortured whistleblowers and assassinated American citizens. If Trump broke the bank, his predecessors handed him the hammer.

Related Topic(s): Bush; Citizens; Corruption; Law; Obama; Prosecution; Trump, Add Tags
Add to My Group(s)
Go To Commenting
The views expressed herein are the sole responsibility of the author and do not necessarily reflect those of this website or its editors.