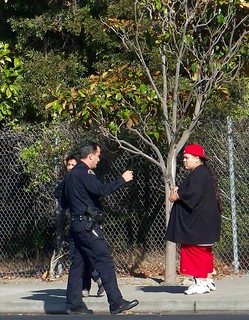 When police in Corinth, Texas stopped Dorothy Bland to caution her against walking on the right side of the street (she was out to get some exercise with a "power walk"), Bland -- a former newspaper editor and current dean of the University of Texas's Mayborn School of Journalism -- felt that she had been racially profiled and said so from the bully pulpit of a column for the Dallas Morning News.

Dashcam video of the encounter seems to contradict the claim of racial profiling. It does, however, include a disturbing bit that we should all take more notice of:

One of the officers asks Bland "do you have your ID on you real quick so I can just "" When she says she doesn't, he follows up with "do you mind if I get your name and date of birth real quick, so I can make sure I put it with the call?"

At this point, neither officer has asserted probable cause to believe that a crime has been committed, or that Bland is a criminal. They just want her information. Why?

The quick and dirty answer is not "to make sure I put it with the call," whatever that means.

Rather it is "so I can run a check to find out if you are a criminal with outstanding warrants that would justify me putting you in cuffs and hauling you in, even though I have no reason whatsoever to think that might be the case."

When I was a kid -- and I'm not THAT old! -- "papers please" or "are your papers in order?" was a common Hollywood trope. When you saw it on film, you knew the person asking was an officer of the Gestapo in Nazi Germany or the police in the Soviet Union. In other words, you knew that the setting was a police state.

Over the years, it's become commonplace for police to request, or even demand, government-issued identification from anyone and everyone they encounter, in any setting. It's happened to me a number of times. For example, one time passing through one of those unconstitutional "DWI checkpoints," the cop wanted IDs from everyone in the car, not just the driver.

The US government has spent the last 20 years or so turning its ID schemes into an internal passport system. It's nearly impossible to travel commercially on a plane, train or bus without showing "papers." Civilians who encounter police officers are treated as guilty of SOMETHING, until ID checks against a government databases establishes their innocence.

Among other bare minimum anti-police-state reforms, police officers should be required to have, and to openly state, probable cause before demanding "papers" from those they allegedly protect and serve.

Related Topic(s): Identification; Militarized Police; Police; Police Abuse Of Power; Police Culture; Police State, Add Tags
Add to My Group(s)
Go To Commenting
The views expressed herein are the sole responsibility of the author and do not necessarily reflect those of this website or its editors.