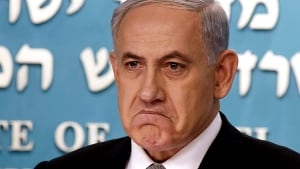 Was it meant as an epic parody or an insult to his audience's intelligence? It was hard to tell.

Israeli prime minister Benjamin Netanyahu took to social media to apologize for last year's notorious election-day comment, when he warned that "the Arabs are coming out to vote in droves" -- a reference to the fifth of Israel's population who are Palestinian.

In videos released last week in English and Hebrew, Mr Netanyahu urged Palestinian citizens to become more active in public life. They needed to "work in droves, study in droves, thrive in droves," he said. "I am proud of the role Arabs play in Israel's success."

Pointedly, Ayman Odeh, head of the Palestinian-dominated Joint List party, noted that 100,000 Bedouin citizens could not watch the video because Israel denies their communities electricity, internet connections and all other services.

Swiftly and predictably, the reality of life for Israel's 1.7 million Palestinians upstaged Mr Netanyahu's fine words. In a radio interview, Moti Dotan, the head of the Lower Galilee regional council, sent a message to his Palestinian neighbors: "I don't want them at my [swimming] pools." Sounding like a mayor in the southern United States during the Jim Crow-era, he added: "Their culture of cleanliness isn't the same as ours. Why is that racist?"

Dotan was no extremist, observed the liberal newspaper Haaretz. He represents the Israeli mainstream. Notably, Mr Netanyahu did not distance himself from Mr Dotan's remarks. At the same time, Samar Qupty, star of a new film on Palestinians in Israel called Junction 48, was questioned for two hours and then strip searched at Ben Gurion airport and denied her hand luggage before being allowed to fly to an international film festival.

Stories of state-sponsored humiliation at the airport are routine for Israel's Palestinian academics, journalists, actors and community leaders -- in fact, for any Palestinian active in the public sphere.

The list of restrictions on Palestinian citizens is long and growing. A database by the legal group Adalah shows that some 60 Israeli laws explicitly discriminate against non-Jews, with another 18 in the pipeline.

Recently leaked protocols reveal that the police have secretly awarded themselves powers to use live fire against Palestinian protesters in Israel, even if they pose no danger. Yet another law threatens jail for any Palestinian citizen who tries to dissuade another from volunteering in the Israeli army.

Related Topic(s): Arab; Benjamin Netanyahu; Israel; Israel And Palestine; Israeli Fascism, Add Tags
Add to My Group(s)
Go To Commenting
The views expressed herein are the sole responsibility of the author and do not necessarily reflect those of this website or its editors.