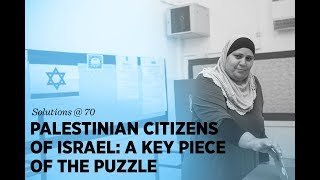 A political coalition representing Israel's Palestinian minority currently the third biggest faction in the Israeli parliament, the Knesset has been plunged into crisis by Prime Minister Benjamin Netanyahu's decision to call for a surprise general election for April.

Long-simmering ideological and personal tensions within the Joint List, comprising Israel's four main Palestinian parties, have erupted into a split over who should dominate the faction.

Knesset member Ahmad Tibi announced this month that he would run on a separate ticket with his small Taal party, after polls showed he was more popular than the List's current head, Ayman Odeh.

The move is yet another blow to the coalition, which has been beset by acrimony since its establishment four years ago.

The latest divisions threaten to further alienate Palestinian voters in Israel, potentially weakening their representation in the Israeli parliament and strengthening the right-wing bloc under Netanyahu.

The 1.7 million Palestinian citizens of Israel are the remnants of the Palestinian population that was mostly expelled from its homeland in 1948 to create the state of Israel. Today, these Palestinians make up a fifth of the population, but face systemic discrimination.

Voter turnout among Palestinian citizens of Israel has been in steady decline for decades, reaching a low at the 2013 election, when just over half cast a ballot.

No Palestinian party has ever been invited to participate in any of the complex coalitions that are the basis of Israeli governments.

In addition, the Palestinian parties' use of the Knesset as a platform to call for an end to the Israeli occupation and for equal rights for Palestinian citizens regularly attracts the ire of Jewish Israeli politicians.

Israeli Minister of Public Security Gilad Erdan recently wrote a letter to the Knesset's ethics committee describing Odeh, the head of the Joint List, as "a criminal and a supporter of terrorism".

While launching his election campaign this week, former defence minister Avigdor Lieberman accused the Joint List of "treason" and called it "total lunacy" to let its representatives participate in the Knesset.

The creation of the Joint List in time for the 2015 legislative elections briefly boosted turnout, as Palestinian voters in Israel hoped it would give a stronger voice to their interests on the national stage.

The List won 13 out of the 120 seats in the Knesset, but a recent poll showed that only 44 percent of Palestinian voters thought it represented their interests, with 52 percent disagreeing.

Tibi's departure threatens to lead to further splintering of the coalition, with the southern Islamic Movement also reportedly considering breaking away or demanding leadership of the surviving List.

Relations between the two other parties Hadash, a block of communist and socialist groups headed by Odeh, and national-democratic party Balad are fractious, as they compete for a similar pool of secular Palestinian voters.

Related Topic(s): Benjamin Netanyahu; Israel; Israel And Palestine; Israeli Government; Israeli-palestinian; Middle East Conflict Israel Palestine Le; Palestinian; Politics, Add Tags
Add to My Group(s)
Go To Commenting
The views expressed herein are the sole responsibility of the author and do not necessarily reflect those of this website or its editors.