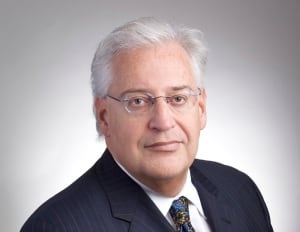 Donald Trump picks settlements supporter David Friedman for U.S. Ambassador to Israel.
(Image by thenewsbay.net)   Details   DMCA
recent visit to Washington reaffirmed one thing in terms of U.S./Israeli relations: that not much will change in the United States' massive one-sided support for Israel, says Palestinian author and activist Ramzy Baroud.

The U.S. will continue to support, arm and publicly defend the ongoing Israeli policy of ethnic cleansing, as things go from bad to worse, Baroud adds, noting that Israel -- with U.S. support -- has already reduced the Gaza Strip to a fenced-in prison, where well over a million Palestinians don't even have access to the basics such as food and clean water. Now, the Israeli government has turned its full attention to the West Bank, which is under siege with new Israeli settlements.

I spoke to Ramzy Baroud about the Netanyahu visit, the illegal settlement boom on the West Bank with its concurrent upsurge in settler violence, the implications of moving the U.S. Embassy to Jerusalem, and the general daily brutalities of living under the iron fist of Israeli occupation.

Baroud is an internationally-syndicated columnist, a media consultant, and the founder of PalestineChronicle.com. His latest book is My Father Was a Freedom Fighter: Gaza's Untold Story.

Dennis Bernstein: It is good to speak with you on the heels of the visit to the U.S. by Israeli Prime Minister Benjamin Netanyahu. ["]

This is sort of how the visit, and, I guess, the story of Palestine and Israel, is being framed by the corporate press. This is coming off the BBC, but it's typical: U.S. President Donald Trump has asked Israeli Prime Minister Benjamin Netanyahu to "hold off on settlements" in a joint press conference.

Mr. Trump also promised to deliver "a great peace deal" but said Israel and the Palestinians must both compromise. So that's the BBC's characterization. How would you frame the current visit?

Ramzy Baroud: Well, the current visit, really, is a culmination of a whole bunch of events that have been taking place for months now prior to Trump coming to office, and the inauguration, and the aftermath. There's a great sense of euphoria, a great deal of euphoria, among the Israeli political elites. The whole two state solution enterprise is dead. The whole era of being told what to do, or being pressured in any way, or being censured, even in the slightest, most gentle way by previous administrations, that era is over, done with.

And now we are entering into a new era in which Israel single-handedly dictates everything it needs to dictate. Not just on Palestinians but on the United States, thus the so-called international community. So I see this kind of as a celebration of the Israeli political triumph, over the American foreign policy, and the balancing act that they have been playing in the Middle East for, really, in the last 25 years since the Madrid peace talks in '91, until today. It's the end of all of that, and it's ushered in our new era, and that's an Israeli era, for sure.

DB: Well, just to set the tone. You say that "Trump's pick for the U.S. Ambassador to Israel [David Friedman], is to the right of Netanyahu. You want to say a little bit about that choice, and his desire to move the Embassy to Jerusalem?

RB: Well, that's right. There was a recent article by a Professor Rashid Khalidi in the New Yorker, in which he said this is the first time in the history of U.S./Israeli relations that you could actually swap both ambassadors, the Israeli and American ambassadors, back and forth and you can't even tell which one is there to defend Israel's interests, and which one is there for American interests. There is this cohesion that is happening at last. And it's a perfect scenario for Israel.

The new pick for the ambassador [Friedman] is someone who is very much pro-settlements, does not even refer to the West Bank by its internationally recognized name. He refers to the occupied territories as Judea and Samaria. It's the land with the biblical reference, made by right-wing ultra-nationalists and religious Jewish politicians. So we are seeing something that's really unprecedented. The attempt at kind of dilly-dallying around this issue is over as far as American foreign policy is concerned.

American foreign policy, now, is exactly what Israel says it is. And I think it was really interesting what Trump said today in the press conference, when he said "I don't care, two states, one state, it's what you guys decide."

Related Topic(s): Benjamin Netanyahu; Conflict; Israeli-palestinian; Jerusalem; Suffering, Add Tags
Add to My Group(s)
Go To Commenting
The views expressed herein are the sole responsibility of the author and do not necessarily reflect those of this website or its editors.