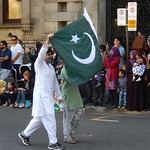 The head of the Iranian armed forces warned Islamabad on Monday (May 8) that Tehran would hit bases inside Pakistan if the government does not confront militants who carry out cross-border attacks.

Ten Iranian border guards were killed by militants on April 26. Iran said Jaish-al-Adl (the Army of Justice), a militant group, had shot the guards with long-range guns, fired from inside Pakistan. Jaish ul-Adl claimed responsibility for the attack.

The group was reportedly founded in 2012 by members of Jundallah (the Army of God), a Sunni militant group that had been weakened following Iran's capture and execution of its leader, Abdul Malik Rigi, in 2010. Its first major attack occurred in October 2013 when 14 Iranian border guards ---. The group claimed responsibility for attacks that killed eight border guards in April 2015

Jaish ul-Adl is a designated terrorist organization by Iran.

Pakistan is located at the junction of Central Asia and Middle East, which gives its location great significance. Pakistan shares its borders with four neighboring countries -- Afghanistan, China, India, and Iran.

Tellingly, Pakistan doesn't enjoy very good relations with three of its four neighbors: namely, Afghanistan, China, India and Iran. With the exception of China, currently Pakistan is facing problems with its neighbors.

Pakistan enjoys exceptionally good ties with China, exemplified by the $50 billion China-Pakistan Economic Corridor, which by linking Pakistan's Arabian seaport of Gwadar with western China will partially offset any threat of an economic blockade on China.

At least 10 people have been killed and dozens others wounded after a cross-border battle between Pakistani and Afghan forces during a Pakistani population census near the border. The attack on Friday left dozens of people wounded and happened near the Chaman crossing point in restive Balochistan province, prompting security forces to ask people to evacuate villages on the border. Chaman, one of the two main border crossings between Pakistan and Afghanistan, was closed in the wake of the incident.

On Sunday, the Pakistani military said it had killed more than 50 Afghan soldiers since the fighting erupted Friday at the Chaman border crossing.

Kabul quickly denied the Pakistan statement. "A very false claims by a Pakistani Frontier Corp that as many as 50 Afghan soldier lost their lives in Pak retaliation; totally rejected," tweeted Sediq Sediqqi, a government spokesman. Samim Khpalwak, a spokesman for the governor of Kandahar province, instead said two troops were lost in the attack, in addition to one civilian death.

Amid worsening ties with Afghanistan, Pakistan announced in March it had started building a fence along the volatile Afghan-Pakistani border. Islamabad said the move was aimed at restricting the movement of militants that cross over the porous border and launch attacks on Pakistani soil.

Every day, thousands of Afghans and Pakistanis cross the Durand Line - the 2,430-kilometer (1,510 miles) boundary established by the British during their colonial rule. The Afghan government does not recognize the Durand Line as the official border between Afghanistan and Pakistan.

Author and journalist. Author of Islamic Pakistan: Illusions & Reality; Islam in the Post-Cold War Era; Islam & Modernism; Islam & Muslims in the Post-9/11 America. Currently working as free lance journalist. Executive Editor of American (more...)
Related Topic(s): Afghanistan; China; Espionage; Gwadar; Iran; Militants; Pakistan; Spying, Add Tags
Add to My Group(s)
Go To Commenting
The views expressed herein are the sole responsibility of the author and do not necessarily reflect those of this website or its editors.