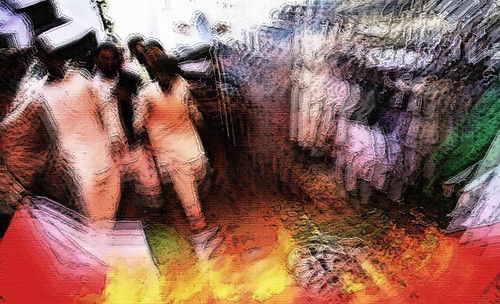 In worsening relations between the nuclear-armed neighbors in of India's move to strip Kashmir's special status, Pakistan on Wednesday announced it was expelling the Indian ambassador and suspending bilateral trade.

The decision was announced after the National Security Committee (NSC) meeting which also decided to review Pakistan's bilateral arrangements with India, take the matter of revocation of Kashmir's special status to the United Nations, including its Security Council, and observe the upcoming Independence Day on August 14 "in solidarity with brave Kashmiris and their just struggle for their right of self-determination".

The meeting attended by the top civilian and military leadership also decided to recall Pakistan's ambassador from New Delhi.

The National Security Committee (NSC) earlier warned the world that India's actions could destabilize the region and threaten international peace.

"The recent Indian measures will increase the levels of violence and turn this area into a flashpoint and a destabilizing factor in the midst of two strategically capable neighboring countries," a statement issued after the meeting said while noting that India through its buildup in Kashmir and "brutal use of force against an unarmed population" was "adding fuel to fire".

The United Nations is making contacts with India and Pakistan at "various levels" amid deteriorating situation between the two South Asian neighbor, Secretary-General Antonio Guterres' spokesperson said on Wednesday.

Responding to questions at the regular briefing in New York, spokesperson Stephane Dujarric denied that Guterres was reluctant to get involved in resolving the grave situation between the two nuclear-armed "There is no reluctance on the part of the secretary-general," the spokesperson said. "We are very well aware and following the situation with a lot of concern."

"Contacts are being had at various levels and we urge all parties to exercise maximum restraint," he added. He did not specify at what level the contacts were taking place.

Meanwhile, the United Nations Human Rights spokesperson has expressed "great concern" over the information blackout in Indian-administered Kashmir which continued after its special status was scrapped by India earlier in the week.

In a statement shared on Wednesday via a video on Twitter, the spokesperson said that what had already been observed to be a pattern, was taken to a "new level" with the latest restrictions placed by India which he said "will exacerbate the human rights situation in the region".

"I would refer you back to our July 8, 2019 report on the human rights situation in Kashmir which documented how authorities have repeatedly blocked communications networks to muzzle dissent, used arbitrary detention to punish political dissidents and employed excessive force while dealing with protests leading to extra judicial killings and serious injuries," said the statement.

"We are seeing again blanket telecommunications restrictions, perhaps more blanket than we have seen before, the reported arbitrary detention of political leaders and restrictions on peaceful assembly.

"These restrictions will prevent the people of [occupied] Kashmir and their elected representatives from participating fully in democratic debate about the future status of Jammu and Kashmir," it observed.

The Guardian view on Kashmir