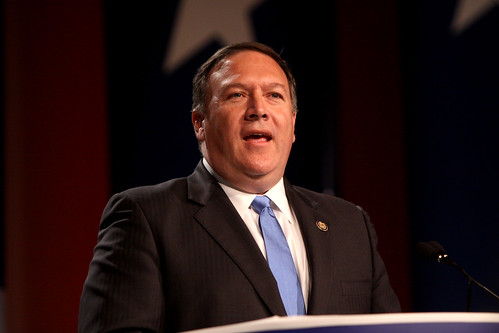 Secretary of State Mike Pompeo told NBC that Iran is an active threat to US interests and "sowing chaos" in the Middle East.

It strikes me that exactly the opposite is true. The Islamic Republic of Iran has in recent years, despite its heritage in the 1979 revolution, acted as an Establishment, status quo power.

I don't agree with Iranian policy, e.g., its Syria intervention; I'm just acting as a dispassionate analyst and asking if it is really destabilizing. I conclude, not so much.

In contrast, the United States (and more especially the Republican Party) has sown enormous amounts of chaos in the Middle East just in the past 20 years.

The Bush administration probably had to try to overthrow the Taliban, given that that organization in Afghanistan sheltered al-Qaeda, which hit the US on 9/11/01. But instead of putting the Northern Alliance in charge and withdrawing, the Bush administration unwisely attempted to establish a long term foreign military presence (many Pushtuns would see it as an occupation). This brilliant policy, which may have aimed at surrounding Russia, has failed so badly that the Taliban, once hated, came back to take over half the country (at least).

This year, US and US-backed forces in Afghanistan killed more innocent civilian bystanders than did the Taliban. Now that is sowing chaos.

Bush also invaded and occupied Iraq, an action Trump himself ran against, but which current National Security Adviser John Bolton supported so strongly he lied to get it. The American war on that country displaced 4 million people from their homes (out of then 26 million), killed hundreds of thousands, wounded millions and left millions widowed and orphaned. Sowing chaos.

As a result of US policies in Iraq favoring the Shiites, Sunnis were alienated from the new order. Fringe groups like the so-called Islamic State in Iraq grew up, and ultimately it became the Islamic State in Iraq and the Levant Daesh or ISIL, and took over 40 percent of Iraqi territory in 2014. Many Iraqi Sunnis were taken hostage by the well-armed, well-funded group.

The Obama administration Syria policy was a mess, but John Kerry admitted to having seen ISIL take over northeast Syria and to having done nothing because he thought it would put pressure on Bashar al-Assad, since Washington wanted him to step down. Ash Carter later used leftist Kurdish militias to defeat ISIL in Raqqa and Deir al-Zor provinces, a huge revolution in Syrian affairs since it empowered the Kurds. Turkey is still furious.

While Defense supported the Kurds, the CIA sent money and arms through Saudi intelligence to 40 "vetted" guerrilla groups aiming to overthrow Bashar al-Assad. The Lord knows to whom the Saudis gave the money, but we know they backed the hard line Salafi Army of Islam (Jaysh al-Islam). Some of the CIA-backed groups had links to al-Qaeda or had al-Qaeda-linked groups as battlefield allies.

The US almost certainly prolonged and made the Syrian Civil War more deadly by its split-personality policies there. On several occasions the Pentagon proxies fought a battle with the CIA proxies.

So the US has been the bull in the China shop, sowing chaos in the eastern reaches of the Middle East. Now the US power elite has set its sights on destabilizing Iran.

Related Topic(s): Chaos; Hamas; Iran; Iran Versus Israel; Iran War, Add Tags
Add to My Group(s)
Go To Commenting
The views expressed herein are the sole responsibility of the author and do not necessarily reflect those of this website or its editors.