"After completing the first round of proximity talks with Israeli and Palestinian leaders, both parties are taking some steps to help create an atmosphere that is conducive to successful talks, includingPresident Abbas's statement that he will work against incitement of any sort..."


Introduction
The start of the proximity talks in May 2010 created hope for the renewal of the Israeli - Palestinian peace process. Palestinian Authority (PA) Chairman and Fatah leader Mahmoud Abbas declared that the PA would fulfill its commitments, with special focus on their stopping incitement.

Contrasting its moderate statements to Western powers in English with its own people in Arabic the Palestinian Authority, the Fatah leaders and the Abbas-controlled official PA media continue to deny Israel's existence, deny Israel's right to exist, define the conflict with Israel as an uncompromising religious war for Allah, promote hatred through demonization slander and libel, and glorify terror and violence.


Click to view full report in PDF
The Report:
Education to deny Israel's existence:
Official PA TV continues to teach children to envision a world in which Israel does not exist and all of Israel is instead part of the "State of Palestine." The following lesson was on a new educational PA TV children's program. The map used in the studio is named "Palestine" and includes all of Israel. 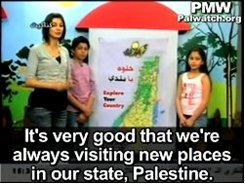 (Image by Unknown Owner)   Details   DMCA
Host:"Show me where you've been on the map of Palestine."
Girl:"We went to the Sea of Galilee [northern Israel] and to the Dead Sea."
Boy points on map: "Jaffa, Haifa." [Israeli cities]... and Jenin and Nablus."
Host:"So you've visited many different places in Palestine, and that's very good. It's very good thatwe're always visiting new places in our state, Palestine."
[PA TV (Fatah), May 16, 2010]

News reporting defining Israel as "Palestine" -1:
Even in sports news the Palestinian Authority official media looks for opportunities to deny Israel's existence. PA-owned Al-Hayat Al-Jadida reported on the coach of an Israeli Arab football team from a city in northern Israel as follows:
"... leading the team to the second division league for the first time in the history of the city of Um El-Fahm, one of thelargest Arab cities in northern occupied Palestine."
[Al-Hayat Al-Jadida(Fatah), May 14, 2010]
News reporting defining Israel as "Palestine" -2:
Israeli Arab Journalist Sa'id Hasanein:
"This visit [by Israeli-Arab Um El-Fahm soccer team to Hebron] is a natural action between people of the same nation... There is no difference between all the people of Palestine, and our obligation is to protectit [Palestine], from the [Mediterranean] sea to the [Jordan] river."
Redwan Sidr, secretary of the Al-Khalil Youth Foundation:
"We welcome our brothers [Israeli Arabs]... to the city of the Martyrs, Hebron... I also hope to see a group fromInterior Palestine[i.e., Israeli Arabs] in the International Hebron Youth Tournament."
[Al-Hayat Al-Jadida, May 17, 2010]
Maps denying Israel's existence:
President Obama has called the use of maps as in the above children's program a security threat to Israel:
"I will never compromise when it comes to Israel's security... Not when there are maps across the Middle East that don't even acknowledge Israel's existence."
[June 4, 2008, AIPAC Conference]
Yet all the maps on official PA TV since the start of the proximity talks continue the longstanding PA policy of defining all of Israel as "Palestine," or in the words of President Obama, "don't even acknowledge Israel's existence." 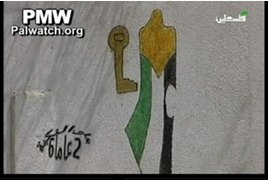 (Image by Unknown Owner)   Details   DMCA
This map is one example among many that appeared this month.
It was broadcast numerous times on PA TV May 4 - 17.

In the PA TV children's programThe Best House, a music video called "We are Palestine's children" featured pictures of map of "Palestine" including all of Israel. [PA TV (Fatah), May 14, 2010] 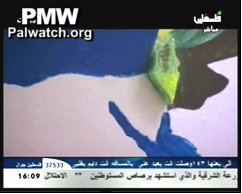 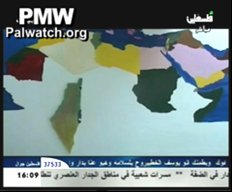 (Image by Unknown Owner)   Details   DMCA
Denying Israel's right to exist and calling for the end of Israel:
An official PA TV statement lamenting the creation of the State of Israel included the following call for the dismantling of Israel because its land is "stolen" land:
Palestinian narrator:"I'm from Jaffa, I'm from Haifa, I'm from Acre, I'm from Nazareth, I'm from Gimzu, I'm from Zakariya, I'm from Ein Kerem (West Jerusalem). [All are cities and towns in Israel.]
Where are you [Israelis] from? Where are you from?
Of course, you're from Ukraine; of course, you're from Germany, from Poland, from Russia, from Ethiopia, the Falasha (a pejorative term for Ethiopian Jews). Why have you stolen my homeland and taken my place? Please, I ask of you, return to your original homeland, so that I can return to my original homeland. This is my homeland; go back to your homeland!"
[PA TV (Fatah), May 4 and 7, 2010]
http://palwatch.org/main.aspx?fi=381&fld_id=381&doc_id=2230


PA TV Quiz offers $500 for answering that Israeli city Haifa is a "Palestinian coastal city."
This PA TV quiz envisioning a world without Israel was broadcast numerous times in May 2010. 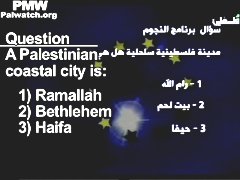 (Image by Unknown Owner)   Details   DMCA
PA TV quiz program. Question posed to viewers at home:
"Which of the following is a Palestinian coastal city?"
1.Ramallah
2.Bethlehem
3.Haifa
Note: The only coastal city among the possible answers is the Israeli city of Haifa.
[PA TV (Fatah), May 23- 24, 2010]
http://palwatch.org/main.aspx?fi=408&fld_id=408&doc_id=2304

Religious war -"Ribat" - against Israel's creation and existence since 1917

The PA Minister of Religious Affairs, Mahmoud Al-Habbash, continues to define the conflict with Israel as an uncompromising religious war - a "Ribat" - war for Islam. "Peace" as a Palestinian goal is said to take 4th place after the Palestinian "rights", "cause" and "religion," none of which will be compromised for peace. Moreover, he elevates the conflict with Israel in religious significance, saying the war was predetermined, being anticipated even in the Quran.

Barbara Crook is associate director and North American representative of Palestinian Media Watch. Founded in 1996, Palestinian Media Watch is an Israeli NGO that studies Palestinian society from a broad range of perspectives by monitoring and (more...)
Related Topic(s): Fatah; Palestinian; Peace; Peace; Start, Add Tags
Add to My Group(s)
Go To Commenting
The views expressed herein are the sole responsibility of the author and do not necessarily reflect those of this website or its editors.

PMW Incitement Watch: The PA during the proximity talks, May 2010