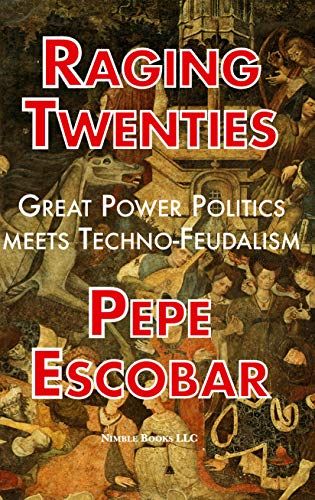 The Raging Twenties started with a murder: a missile strike on Gen. Soleimani at Baghdad airport on Jan. 3, 2020. Almost simultaneously, that geopolitical lethality was amplified when a virus cannibalized virtually the whole planet.

It's as if Time has been standing still -- or imploded -- ever since. We cannot even begin to imagine the consequences of the anthropological rupture caused by SARS-CoV-2.

This new terminology collates to the lineaments of a new regime, actually a hybrid mode of production: turbo-capitalism re-engineered as Rentier Capitalism 2.0, where Silicon Valley behemoths take the place of estates, and also The State. That is the "techno-feudal" option, as defined by economist Cedric Durand.

A sanitary shock was superimposed over the ongoing economic shock -- where financialization always takes precedence over the real economy.

But then the glimpse of a rosy future was offered towards more "inclusive" capitalism, in the form of a Great Reset, designed by a tiny plutocratic oligarchy duly self-appointed as Saviors.

All of these themes evolve along the 25 small chapters of this book, interacting with the larger geopolitical chessboard.

SARS-CoV-2 accelerated what was already a swing of the power center of the world towards Asia.

Since WWII, a great deal of the planet lived as cogs of a tributary system, with the Hegemon constantly transferring wealth and influence to itself -- via what analyst Ray McGovern describes as SS (security state) enforcing the will of the MICIMATT (Military-Industrial-Congressional-Intelligence-Media-Academia-Think-Tank) complex.

This world-system is irretrievably fading out -- especially due to the interpolations of the Russia-China strategic partnership. And that's the other overarching theme of this book.

As a proposal to escape our excess hyper-reality show, this book does not offer recipes, but trails: configurations where there's no masterplan, but multiple entryways and multiple possibilities.

These trails are networked to the narrative of a possible, emerging new configuration, in the anchoring essay titled "Eurasia, The Hegemon and the Three Sovereigns."

In a running dialogue, you will have Michel Foucault talking to Lao Tzu, Marcus Aurelius talking to Vladimir Putin, philosophy talking to geoeconomics -- all the while attempting to defuse the toxic interaction of the New Great Depression and variations of Cold War 2.0.

Related Topic(s): 2020; Amazon; Books; Capitalism; Dialogue; Pepe Escobar; Politics; Russia-china; Soleimani, Add Tags
Add to My Group(s)
Go To Commenting
The views expressed herein are the sole responsibility of the author and do not necessarily reflect those of this website or its editors.