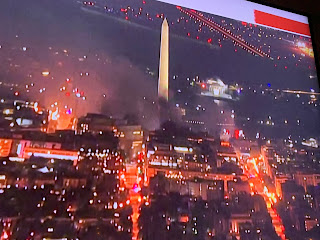 Poverty is the parent of revolution and crime
-Aristotle

It has been an extraordinary week. On the heels of a pandemic and months- long lockdown, a nationwide uprising erupted in response to the brutal killing of George Floyd. In some 75 cities across at least 16 states, and around the world, militant, multiracial gatherings of thousands of rightfully-enraged people overwhelmed police forces, prevented arrests, forced the evacuation of, and burned, a police precinct, and damaged and burned dozens of buildings. Mainstream news reporters from around the world were arrested and fired upon with rubber bullets on live television. Police SUVs drove into crowds of people. It has been the most extensive, and the most threatening, explosion of popular rage against the machine since the uprisings of 1967-8.

In the midst of this mass uprising, and marking a turning point in the establishment's attitude, there came the press conference of Minnesota's Democratic governor Tim Walz-accompanied by Minneapolis's young Democratic mayor, Jacob Frey, by St. Paul's young, black, Democratic mayor, Melvin Carter, by the state's black Commissioner of Public Safety, John Harrington, by the state's black, Muslim Attorney General (and former progressive-favorite candidate for DNC chair), Keith Ellison, and by Minnesota National Guard commander, General Jon Jensen-where all waxed apoplectic about the damage caused by "tens of thousands" of George-Floyd protestors who "grossly outnumbered" the police.

It was a scene repeated throughout the country, as in Atlanta, where Mayor Keisha Lance Bottoms and Police Chief Erika Shields spoke on the same themes, accompanied by rappers Killer Mike and T. I.

What disturbed me in these tableaux?

First, let me state my understanding that we are in the midst of a political fight to end the disproportionately racialized social inequality and desperation U.S. capitalism produces, and the inevitably racist policing and criminal justice practices that sustain it. There are tens of thousands of people coming out all around the country to change that, and it's a fight that will involve confrontation with and damage to the repressive apparatus that defends it, including police cars and police stations and resistance to police officers. If you think that's a legitimate political fight, these are political targets.

Related Topic(s): Black Lives Matter; George Floyd; George Floyd Murder; Inequality; Police Brutality; Poverty In America; White-black Economic Inequality, Add Tags
Add to My Group(s)
Go To Commenting
The views expressed herein are the sole responsibility of the author and do not necessarily reflect those of this website or its editors.