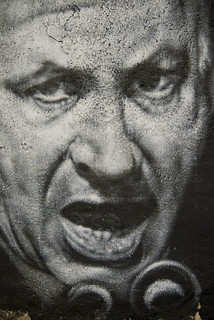 EVERYBODY KNOWS what the Israeli elections are about.

The choice is stark: on the one side, the dream of a Greater Israel "from the sea to the river," which would in practice be an apartheid state; on the other side, an end to the occupation and peace.

Some would add a social choice: on the one side, the existing neoliberal state with the widest inequality in the industrialized world; on the other side, a social-democratic state of social solidarity.

So is the country plastered with posters about war and peace, occupation and settlements, wages and the cost of living? Are TV programs full of them? Are they occupying the front pages of the newspapers?

Far from it. Five weeks to election day, and all these subjects have practically disappeared.

The entire country is preoccupied by what Sherlock Holmes would have called the Mystery of the Bottles.

Israel is an ecology-minded society. It felt threatened by discarded plastic and glass bottles. So a law was enacted that obliges supermarkets and other retail businesses to demand a small deposit -- a few cents -- about 13 for a plastic bottle, about 30 for a wine bottle -- to be returned in exchange for the empty bottle. Many people, like myself, don't bother.

But small sums can become large sums. Many poor elderly people earn a kind of living by collecting empty bottles from the dustbins in the streets, mostly for organized crime families.

All the returned bottles are treated for reuse. The environment is saved. Everybody is satisfied. So how did this become a hot election issue, pushing everything else from the national agenda?

The family is housed by the state in the official Prime Minister's residence in the center of Jerusalem. It also owns two private dwellings -- an apartment in a well to-do Jerusalem neighborhood and a sumptuous villa in Ceasarea, a neighborhood of the very rich.

Related Topic(s): Benjamin Netanyahu; Israel; Public, Add Tags
Add to My Group(s)
Go To Commenting
The views expressed herein are the sole responsibility of the author and do not necessarily reflect those of this website or its editors.