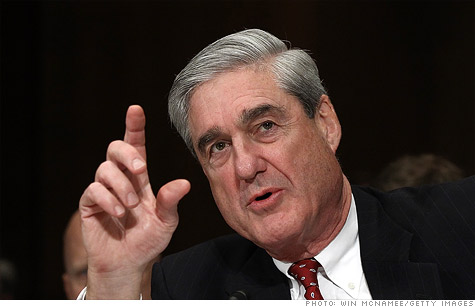 FBI Director Robert Mueller alleged that new terrorism threats were emerging in Tunisia, Libya, Mali, Algeria, Syria, and Egypt, as well as in the United States during an interview with cable channel CNN on Thursday. The purpose of Mueller's statement is to stoke fear and apprehension in the American population to justify the police state surveillance programs set up by the government.

"You have al Qaeda growing in countries like Somalia, but most particularly in Yemen. And there's still substantial threat out of Yemen," said Mueller. "And now you have the countries in the Arab Spring: Tunisia, Libya, Syria, Mali; Egypt most recently, where they're breeding grounds for radical extremists " you have, within the United States, the growth of homegrown, radicalized extremists who are radicalized on the Internet and then get their instructions for developing explosives on the Internet, as well."

Mueller provided no facts to support his claims. Of course, even accepting this were all true, no American media interviewer would ask why so many in the Middle East hated and wanted to attack the US and whether or not that anything to do with predatory American military and foreign policy in the region.

Overall, the FBI director's comments to CNN were a series of lies and distortions. For example, Mueller asserted that the NSA surveillance programs developed since the 2001 attacks could have prevented the 9/11 events by allowing the government to identify the individual plotters in advance: "I think there's a good chance we would have prevented at least a part of 9/11. In other words, there were four planes. There were almost 20 -- 19 persons involved. I think we would have had a much better chance of identifying those individuals who were contemplating that attack."

The claim that NSA spying might have prevented 9/11, which is not original to Mueller, is contradicted by an entire body of evidence. Many, if not all, of the perpetrators were well known to the FBI and the CIA, who monitored and tracked the plotters for many months. The CIA and FBI ignored repeated warnings from local agents and agents abroad of the threat of an impending attack, including the use of aircraft against buildings. The preponderance of the evidence strongly suggests, in fact, that the Bush administration permitted some sort of terrorist attack to proceed, in order to provide it the pretext for the launching of wars in the Middle East and the passage of anti-democratic, repressive legislation.

Mueller also claimed during the interview that the NSA surveillance programs only acquire metadata, saying that other types of data require a "court order."

"I would think the programs [that] have come under scrutiny recently are designed to pick up, for the most part, metadata or to that extent that there is more than metadata, you have to do it by court order," Mueller said.

Leaving aside what Mueller "would think," numerous reports released over the past months have shown that the NSA surveillance programs involve the collection and analysis of the content of vast numbers of communications in the US and abroad, without requiring specific warrants or specific court orders. Mass data collection targeting the American people, not confined to metadata, but encompassing many types of data, including the content of emails, telephone calls and text messages, is currently ongoing. For his part, Mueller has been a strong defender of surveillance, including bulk collection of US phone records.

Prompted by the CNN host, "We've given up some civil liberties, though, since 2001. Do you agree?" Mueller answered, "Well, I would query about what do you mean in terms of civil liberties. Do we exchange information in ways we did not before? Absolutely. You can say that that is a ... to the extent that you exchange information between CIA, FBI, NSA and the like ... you could characterize that as somehow giving up liberties. But the fact of the matter is, it's understandable and absolutely necessary if you want to protect the security of the United States."

Thus speaks the police-state personality. For Mueller, it is taken for granted that the various agencies should collect vast amounts of data on the US and foreign populations, and then share this data amongst themselves, as these measures are "absolutely necessary" to protect US security.

When asked about the FBI's knowledge of alleged Boston Marathon bomber Tamerlan Tsarnaev's ties to extremist groups, Mueller claimed that a thorough investigation had been made into Tsarnaev and the inquiry was abandoned because no evidence of criminal activity was found:

"We got notice from the Russians who looked at this particular individual and the agent who received that on the Joint Terrorism Task Force did a very thorough job in following up that. He ran all the -- all of the traces. [Went] to the college that he had attended [and] interviewed the parents and ultimately interviewed him and could not find any basis to do a further in -- investigation. So I think we did follow up on that," Mueller said.

Despite Mueller's soothing assertions, evidence points to the fact that federal agents shut down an investigation of Tamerlan Tsarnaev in the aftermath of the September 12, 2011 triple homicide in Waltham, Massachusetts. Tsarnaev's regular visits to the crime scene in the years before the murder, his proficiency in martial arts and his suspicious behavior following the killings -- such as joking about one of the victims with whom he had supposedly been close friends -- should have made him a prime suspect.

Instead, Tsarnaev was never even questioned by the agents investigating the murder, nor were the hang-out spots frequented by Tsarnaev and one of the victims visited even once by investigators. Tsarnaev was later allowed to travel to Dagestan in the North Caucasus in 2012, where he associated with separatist extremists, and then to re-enter the United States unmolested.

Mueller acknowledged during recent congressional testimony that the FBI withheld information on the agency's investigation of Tamerlan Tsarnaev from state and local officials in the run-up to the Boston bombings. A crucial unanswered question thus continues to hang over the affair: Why was critical information on the Tsarnaev brothers, who were residing in the Boston metro area and acquiring detonators and explosive materials, intentionally not shared with state and local law enforcement?

articles from www.wsws.org
Related Topic(s): FBI Director Robert Mueller; Federal Agency FBI; Surveillance; US Govt Surveillance-Wiretapping Intl; Us Foreign Policy, Add Tags
Add to My Group(s)
Go To Commenting
The views expressed herein are the sole responsibility of the author and do not necessarily reflect those of this website or its editors.

Why have the media and Obama administration gone silent on MH17?

One in five US children do not have enough to eat

US states cut higher education spending by nearly a third