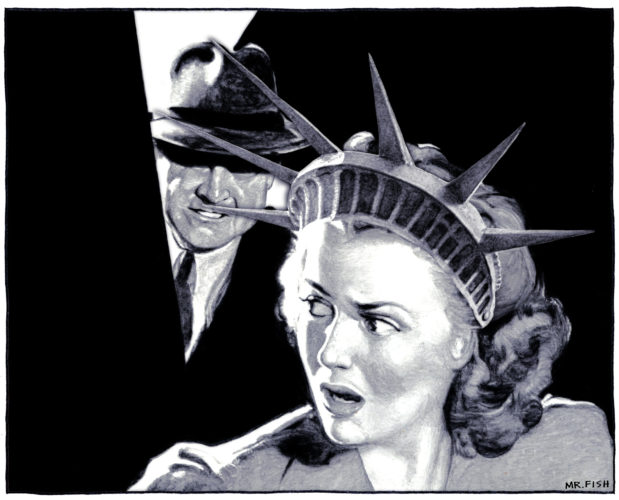 There are two forms of government in the United States. There is the visible government -- the White House, Congress, the courts, state legislatures and governorships -- and the invisible government, or deep state, where anonymous technocrats, intelligence operatives, generals, bankers, corporations and lobbyists manage foreign and domestic policy regardless of which political party holds a majority.

The most powerful and important organs in the invisible government are the nation's bloated and unaccountable intelligence agencies. They are the vanguard of the invisible government. They oversee a vast "black world," tasked with maintaining the invisible government's lock on power. They spy on and smear domestic and foreign critics, fix elections, bribe, extort, torture, assassinate and flood the airwaves with "black propaganda." They are impervious to the chaos and human destruction they leave in their wake. Disasters, social upheavals, economic collapses, massive suffering, death and rabid anti-American blowback have grown out of the invisible government's overthrow of democratically elected governments in Iran, Guatemala and Chile and the wars it fostered in Vietnam, Afghanistan, Iraq, Libya and Syria. The United States and the rest of the globe would be far safer if our self-styled shadow warriors -- who failed to foresee the Iranian revolution, the collapse of the Soviet Union, the 9/11 attacks or the absence of Iraqi weapons of mass destruction and whose widespread use of torture makes them the most potent recruiters for radical jihadism -- were made accountable to the public and the rule of law.

There are periodic glimpses of the moral squalor and ineptitude that define this shadow world, such as those provided by the 1970s hearings led by Sen. Frank Church and the leaking of photographs of prisoners being tortured at Abu Ghraib in Iraq. But those who attempt to defy or expose the pernicious inner workings, including Edward Snowden and Julian Assange, are usually discredited, persecuted, silenced and sometimes "disappeared." The invisible government justifies its secrecy and criminality as necessary in the face of existential threats, posed first by communism and later by Islamic terrorism. The ends always justify the means. Anything, no matter how immoral or criminal, is permissible.

The best window we have into this shadow world comes with historical accounts of its crimes, including those in Stephen Kinzer's new book, "Prisoner in Chief: Sidney Gottlieb and the CIA Search for Mind Control." The black sites and torture techniques pioneered by the Central Intelligence Agency in the decades after World War II -- developments that saw people kidnapped, tortured and often executed -- were "an indispensable link in this grim chain," he writes.

The medical experiments carried out by the Nazis in concentration camps and the Japanese in the occupied Chinese region of Manchuria elicited two responses after World War II. There were some in the visible government who sought to hold the war criminals accountable. But there were many in the invisible government who wanted to obtain and exploit the results of these experiments and recruit the war criminals who had overseen them to work for U.S. intelligence services and the military.

The backgrounds of the Nazi scientists who had directed chemical and biological warfare projects, murdering thousands of helpless victims, including children, with agents such as the gas sarin, were sanitized by the invisible government in what became known as Operation Paperclip. No criminal, including Kurt Blome, who had overseen the Nazis' research into biological warfare, was too heinous or sadistic for the United States to welcome and use.

"Whenever a scientist they coveted turned out to have a blemish on his record, they rewrote his biography," Kinzer writes. "They systematically expunged references to membership in the SS, collaboration with the Gestapo, abuse of slave laborers, and experiments on human subjects. Applicants who had been rated by interrogators as 'ardent Nazi' were re-categorized as 'not an ardent Nazi.' References to their exemplary family lives were added. Once they had been thus 'bleached,' they became suitable candidates for Paperclip contracts."

Shiro Ishii, who between 1936 and 1942 killed as many as 12,000 captured Chinese soldiers, anti-Japanese partisans, Koreans, Mongolians, prisoners, mental patients and, by some accounts, American prisoners of war in medical experiments on behalf of the Japanese government, was a highly valued asset to the invisible government.

Ishii oversaw a four-square-mile complex, called Unit 731, that housed 3,000 scientists and other employees. Kinzer writes that victims "were exposed to poison gas so that their lungs could later be removed and studied; slowly roasted by electricity to determine voltages needed to produce death; hung upside down to study the progress of natural choking; locked into high-pressure chambers until their eyes popped out; spun in centrifuges; infected with anthrax, syphilis, plague, cholera, and other diseases; forcibly impregnated to provide infants for vivisection; bound to stakes to be incinerated by soldiers testing flamethrowers; and slowly frozen to observe the progress of hypothermia. Air was injected into victims' veins to provoke embolisms; animal blood was injected to see what effect it would have. Some were dissected alive, or had limbs amputated so attendants could monitor their slow deaths by bleeding and gangrene. According to a U.S. Army report that was later declassified, groups of men, women, and children were tied to stakes so that 'their legs and buttocks were bared and exposed to shrapnel from anthrax bombs exploded yards away,' then monitored to see how long they lived -- which was never more than a week. Ishii required a constant flow of human organs, meaning a steady need for 'logs' [the euphemism for victims]."

After each experiment, "Ishii's microbiologists would meticulously remove tissue samples and mount them on slides for study," Kinzer writes. "Technicians used their research to prepare poisoned chocolate and chewing gum, as well as hairpins and fountain pens rigged with toxin-coated needles for use in close-quarters killing. In industrial-scale laboratories they bred plague-infested fleas and manufactured tons of anthrax that were placed in bomb casings and used to kill thousands of Chinese civilians."

America's invisible government went to great lengths to recruit Ishii and obtain the extensive records and slides from his gruesome experiments. These types of experiments would soon be replicated by the CIA in a top-secret program, MK-ULTRA, with the assistance of Ishii and an assortment of ex-Nazis.

Kinzer builds his book around Sidney Gottlieb, an elusive, quirky and powerful operative in the CIA who in his quest for mind control -- something he and others in the CIA had convinced themselves the Soviets had mastered -- oversaw medical experiments that had been originated by his German and Japanese collaborators. These experiments were coded-named Bluebird and later Artichoke, which Kinzer calls "one of the most violently abusive projects ever sponsored by an agency of the United States government." The torture sessions often permanently shattered the minds of his subjects. Victims were kidnapped (later this would be called "extraordinary rendition") and sent to clandestine centers around the globe -- now known as "black sites"or were picked from the prison population abroad and at home. Those forced into taking part in these experiments included impoverished African Americans at the Addiction Research Center in Lexington, Ky. Many of the victims were labeled "expendables," meaning they could be murdered after the experiments and disappeared. The corpses were usually burned. Anyone who was powerless, or could be made powerless, was a potential target. Mentally handicapped children at the Walter E. Fernald State School in Massachusetts, for example, were fed cereal laced with uranium and radioactive calcium and their induced sicknesses were monitored. Gottlieb oversaw the administering of LSD and other drugs to induce psychotic states at the federal prison in Atlanta and a youth correctional facility in Bordentown, N.J. None of his subjects consented to being a human guinea pig, and many ended up psychologically impaired for life. The Boston gangster James "Whitey" Bolger, being held in the Atlanta penitentiary, was told he would be part of an experiment on curing schizophrenia but then was surreptitiously given LSD nearly every day for 15 months. CIA scientists also conducted experiments on terminally ill patients at an annex of Georgetown University Hospital in Washington, D.C.

Gottlieb searched for years for a cocktail of drugs that, in Kinzer's words, would draw "prisoners away from their identities, induce them to reveal secrets, and perhaps even program them to commit acts against their will." It was a vain quest. But with each failure he and the CIA became ever more zealous, working closely with former German Gen. Walter Schreiber, the onetime surgeon general of the Nazi army who had "approved experiments at the Auschwitz, Ravensbrück, and Dachau concentration camps in which inmates were frozen, injected with mescaline and other drugs, and cut open so the progress of gangrene on their bones could be monitored." Kinzer adds that according to one American researcher, the experiments "usually resulted in a slow and agonizing death."

Gottlieb had a habit of secretly lacing the drinks of colleagues with LSD to see their reaction. Some never recovered. One of his victims was Frank Olson, a CIA scientist who was appalled by the brutal interrogations he witnessed and planned to resign from the CIA. Gottlieb and his secretive group of torturers and assassins were terrified Olson would go public. Olson was found dead in 1953 on a sidewalk in Manhattan after allegedly diving through a hotel window. His son Eric had his father's body exhumed in 1994 and turned over to James Starrs, a forensic pathologist at George Washington University in the District of Columbia. "Starrs had found no glass shards on the victim's head or neck, as might be expected if he had dived through a window," Kinzer writes. "Most intriguingly, although Olson had reportedly landed on his back, the skull above his left eye was disfigured."

Related Topic(s): Children; Drugs; Government Corruption; Government Cruelty; Invisible Government; Patients; Prisoners; Scientists; Torture; Truth; (more...) Violence, Add Tags  (less...)
Add to My Group(s)
Go To Commenting
The views expressed herein are the sole responsibility of the author and do not necessarily reflect those of this website or its editors.