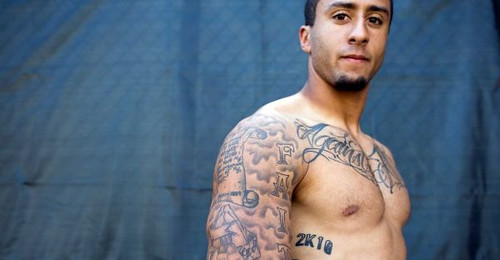 My TV is off and the network is too. There will be some fans that lose their loyalties to the League and stop consuming their brand. Good. This will only accelerate the punitive effects of mistreating players who elect to exercise their right of free speech.

Kaepernick hasn't called for a boycott, but that doesn't mean we won't. The longer he's kept out of the League the more protests; the more damage to the NFL. So what? If the price of exercising our Constitutional rights is to end a sport that leaves its players permanently brain damaged, then so be it. If the NFL is so anti-American as to deny its players a right to play simply because the act of kneeling is destructive to their brand image, then let it be even more destructive and costly.

Let the League do more to ally itself with Trump and other rich white men and thus further act to crush the expression of political opinion. As Americans, it's our duty to oppose blind obedience and subservience by confronting those who pretend to have the right to grant us our freedoms or restrict them, as if by their permission in a time and place of their choosing. This reaction will further exacerbate the impacts of kneel downs and other expressions of free speech in a doom loop for the white rich men who profit so mightily from the spectacle of more lowly born men offering their bodies on the altar of sport.

Those who kneel down are no less American or any less patriotic or brave, as the fine example shown by Kaepernick starts a growing bonfire of expression. He's a shining example of someone who is willing to sacrifice career for the benefit of all so in this sense he's a real leader, brave, and exemplifies the selfless giving of himself in a righteous cause whatever the cost.

Servant leadership is the opposite of Trump rule as if by king over us, his subjects. I totally reject him and his contamination of our office. I demand his impeachment as a matter of national urgency, regardless of political affiliation.

Democrats should be ashamed for trying to play this situation for political gain. How much do they really care for our country if they're willing to let Trump not face impeachment and this charade to continue? Democrats are willing to wait till past 2018 under the hope that Trump will make winning easier. This isn't right--they and the Republicans must do their job to immediately remove this vile man from the office he pretends to own.

The author lives in Colorado, photographing the natural beauty of the Rocky Mountains. Politically, John's an X generation independent with a blend of traditional American and progressive values. He is fiscally conservative and believes in (more...)

Related Topic(s): Colin Kaepernick; Colin Kaepernick, Add Tags
Add to My Group(s)
Go To Commenting
The views expressed herein are the sole responsibility of the author and do not necessarily reflect those of this website or its editors.

Nuclear Power: Unsafe in any dose

U.S. at the boundaries of empire