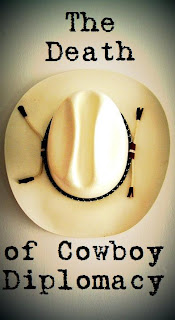 (Image by Unknown Owner)   Details   DMCA
Justice Is Served. Obama Is Vindicated. Statesmanship Is Re-established. And The Right is...check-mated.

A statesman does not gloat: in an hour when United States needed supreme statesmanship, Barack Obama made the announcement of Osama Bin Laden's with a slightly somber note. He did not smile. He simply noted that justice had been served and that we must be ever-vigilant in the war on terrorism. He also reinforced his image as a Nobel Peace Prize laureate in declaring:

We must also reaffirm that the United States is not - and never will be - at war with Islam. I've made clear, just as President Bush did shortly after 9/11, that our war is not against Islam. Bin Laden was not a Muslim leader; he was a mass murderer of Muslims. Indeed, al Qaeda has slaughtered scores of Muslims in many countries, including our own. So his demise should be welcomed by all who believe in peace and human dignity.

He did not gloat. Instead, the gloating was done for him around the country, and while people are justified in being satisfied with the Al Qaeda leader's death as a point of closure to horrific events in our history, the current hysteria may look to the world exactly like the joy Islamic militants had demonstrated on 9/11. Obama's calm hopefully countered that image.
The cheers may also signal a blow to the Right, for those jubilant crowds at Ground Zero are the people the Republican Party counted on to destroy Barack Obama. After all, they are cheering Obama's "gutsy" but intelligent strategy. Not...George...Bush's.
And it's very obvious that conservatives across the country are holding back tears of frustration. After all, Bush's "cowboy diplomacy" was an oxymoron: it was no diplomacy at all. His desire to wear a white stetson and go into the Middle East with guns blazing was loutish and engendered more fear of the U.S. than admiration. It was the result of an excuse to annihilate Saddam Hussein, an act of bravado that cost more U.S. lives than were lost on 9/11 and spiraled the economy down into debt. Bush was derided as a brute - history's greatest diplomatic dimwit.
Reactions by Republicans have tried to temper their commendations of Obama with references to Bush:
Eric Cantor: "I commend President Obama who has followed the vigilance of President Bush in bringing Bin Laden to justice."
Tim Pawlenty:  In the hours after the 9/11 attacks, President Bush promised that America would bring Osama bin Laden to justice -- and we did."
Donald Rumsfeld: " All of this was made possible by the relentless, sustained pressure on al Qaeda that the Bush administration initiated after 9/11 and that the Obama administration has wisely chosen to continue."


Perhaps the most loyal adherents to cowboy diplomacy are the country's conspiracy theorists: Obama's comparatively restrained militarism helped them paint him as un-American. And on the outset, the publication of the long form birth certificate coupled with Bin Laden's demise should render the brand of un-American moot and pointless. Of course,  conspiracy theorists are still having a field day because of the manner in which the body of Bin Laden was disposed of: dumping it in the ocean was not (to them) conclusive. No matter that the comprehensive coverage of the assault by CBS IN THE WAR ROOM leaves no doubt that Obama, Vice-President Biden, Secretary of State Clinton and other officials viewed the assault in real time. No matter that one woman in the compound made a positive identification of the body. No matter that photos were taken. No matter that positive DNA results were released.
No matter.

We have Birthers (some refuse to believe the legitimacy of the long form) and now there will be (Bin Laden) "Deathers" as well. Ho hum. We can only hope that all these theorists whose raison d'etre is to "get" Obama at any cost may find their numbers dwindling, not because of the last two events, but because the pile up of conspiracy theories may increase to such a point that the industry itself may implode. Too many jokes founded on too many theories will eventually bore the public and adamant theorists will be looked upon for what they are: rubes who will grasp at anything to discredit him and make him look un-American.

And when that happens, let's hope that they will take cowboy diplomacy along with them. It's too expensive. We can't afford it any more.

Rev. Dan Vojir is has been writing/blogging on religion and politics for the better part of ten years. A former radio talk show host (Strictly Books " Talk America Radio Network) and book publisher, Dan has connected with some of the most (more...)
Related Topic(s): Al Qaeda; Al-Qaeda; Barack Obama Birth Certificate; Bin Laden Dead; Conspiracy Theories; Cowboy Diplomacy; Deathers; Islamophobia; Obama Administration; Osama Dead, Add Tags
Add to My Group(s)
Go To Commenting
The views expressed herein are the sole responsibility of the author and do not necessarily reflect those of this website or its editors.