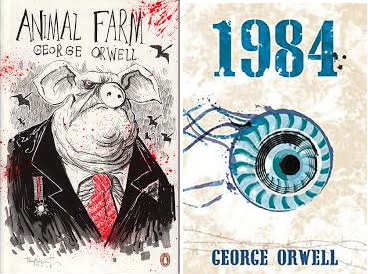 Big Brother embraces itself
(Image by Youth Debates)   Details   DMCA
How do you explain the fact that the John Birch Society used 1984 as its main office telephone number in the 1960s? Or that both Animal Farm and 1984 are force-fed to virtually the entire western world in people's formative years in their teens, even as Big Brother jacks up repression and surveillance, and pursues ever more cruel and senseless wars?

A look at Orwell's weaknesses reveals how Big Brother turned the tables on him, getting the last laugh.

Both Animal Farm (1945) and 1984 (1949) are listed on the Random House Modern Library 100 Best Novels of the 20th century (#31 and #13), and have been translated into more than 60 languages, more than any other novels. Orwell "helped prevent the realization of the totalitarian world he described", according Jeffrey Meyers in Orwell: Wintry Conscience Of A Generation (2001). We are taught in school to revere his warnings against "Thought Police" and the supreme importance of individual rights and freedom of thought.

On the surface, he looks oddly heroic--a scholarship to Eton, disdaining Cambridge to serve as a policeman in Burma; his gritty apprenticeship as a writer bumming around Paris and across Britain; escaping death by a whisker fighting fascism in Spain; writing his political allegories as he wasted away from the 'poor writer's disease'. The unrelenting pessimism of his work reflects his "inner need to sabotage his chance for a happy life", observes Jeffrey Meyers in Orwell: Wintry Conscience Of A Generation (2001).

It is as if he wanted to suffer, and make his one love, his first wife Eileen, suffer along with him, first in an isolated, decrepit cottage in Wallington and then exposed to death in Barcelona. She predeceased him in a botched hysterectomy while he was reporting from liberated Germany in 1945, himself fatally ill. Within weeks of her sudden death, he was proposing to various women, but they rejected the clearly very ill Orwell, who insisted in living on a cold, rainy Hebrides island, Jura, miles from the nearest town, without electricity, in conditions guaranteed to kill him.

His identification with the poor and downtrodden, plus his sado-masochistic neurosis (colonial policeman, believer in the strap as teacher, willful destroyer of his own health, bungler in love), resulted in Animal Farm and 1984, which were immediately promoted by his own 1984 Oceania power zone--the US/British empire--as a powerful ideological weapon to fight the other zones--Eurasia (the Soviet Union and Europe, which Orwell assumed would be taken over in toto by a now-'imperial' USSR following the nuclear WWIII) and Eastasia (China and Japan).

In 1984, the 'hero' Winston Smith ends up an alcoholic, brainwashed into loving Big Brother. In our Oceania power zone, Orwell's message is mangled, its dystopian reflection on modern society limited to the Soviet Union, which at the time was under Stalin's harsh dictatorship. The novel was/is taught as a warning not about East and West, but only the East.

This is not what Orwell intended at all. 1984 was a parody of 1948 Labor Britain, now seen by Orwell as just another Soviet Union. Oceania ruled the world, and there was no hope left, East or West. There is no 'happy ending' in 1984.

So his message (a pox on both your houses) was lost, and the novel proved to be a devastating weapon only aimed at Oceania's rivals, not at Oceania itself. Did Orwell help "prevent the realization of the totalitarian world"? Not by a long shot. Oceania is alive and well!

Even as schoolchildren are indoctrinated by Orwell's gloomy social fables, "Newspeak" and "Thought Police" are more widespread than ever, and we remain under their control.

Orwellian indoctrination, using Orwell as a kind of vaccine, helped Oceania not only to defeat communism, but to move decisively against the remaining enemies after 2001, invading the disputed Middle East/ Central Asia, with nary a peep from the proles. It seems that rather than waking people up to their chains, Orwell's novels, and their incorporation into mass commercial culture, have acted as a kind of inoculation, inuring people to the totalitarian 'dis-ease' even as it metastasizes. How did this remarkable psychosomatic phenomenon come about?

Penniless, scruffy Orwell, so adamantly devoted to (his) personal freedom, so disdainful of capitalism with its commodity fetishism. As he lay dying in an elite London hospital, he fumed against an ad for a sock suspender on the leg of a classical hero: "Physical beauty is a sacred thing and should be shielded from the vile devices of advertisers," he lectured Malcom Muggerridge. He had witnessed friends like Cyril Connolly sell out to live a sybaritic lifestyle.


Yet he turned against the only group that stood firmly against capitalism, his communist acquaintances. On his deathbed, he married a cynical Connolly groupie, Sonya Brownell, bequeathing her his new, very lucrative name. A lifelong republican, he embraced the monarchy. A lifelong atheist, he pleaded for a church funeral and burial. Where and how did the ascetic, working-class hero lose it?

Orwell's neurotic, depressive character, his outsized ego, his repressive public-school upbringing and cold, almost fatherless family life, are all there in his writing. He was a loner, and could never work with anyone, let alone a movement, for long. He refused to join any political group, and as the communists rallied around the dictator Stalin in defense of 'real existing socialism', it became impossible for him to work with his natural allies against fascism.

Related Topic(s): Dystopia; Empire; Freedom; Money; Neocons-PNAC; Orwellian; Propaganda; Sex; Stalin; Totalitarianism; (more...) Wars, Add Tags  (less...)
Add to My Group(s)
Go To Commenting
The views expressed herein are the sole responsibility of the author and do not necessarily reflect those of this website or its editors.