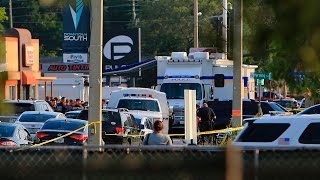 Some readers have asked for my take on the Orlando Shooting.

I don't have one. Let's see if together we can form a reasonable view.

Let's start with the basic first question. Before there can be a murder declared, there must be a body. Has anyone seen on TV or in newspapers pictures of dead bodies? Bodies should be readily available if the reports are correct that 50 people were killed and 50 or more were wounded and in hospital.

I cannot bear the presstitute TV and print media. These are full-time propaganda organizations. Hopefully, some of you hold your nose and watch the news and can fill in the spaces. Has anything we have been told been confirmed by any real evidence?

Initially, I saw a CNN newscast and a RT report. The reports were heavy with verbiage of blood being all over the place, but the only visual evidence offered were three people, supposedly injured, being helped, not by medics or first responders, but by ordinary folks. A couple of people were helping a guy with tattoos in place of a shirt, but there was no sign of blood. Several people were helping people in police uniforms to carry a person who they dumped in the back of a pickup truck, not in the cab. About six people were carrying a person stretched out prone (no stretcher) down a street.

There was no blood and it looked like a crisis acting performance. Why prone? Is an injured person really able to keep his body stiff so that he can be carried along prone parallel to the ground? Where are they taking him? Is this just a camera walk-by? What has become of the protocol that untrained people are not to attempt to help injured people? When police arrive at a scene, they usually run off bystanders, not recruit them to assist their activities or allow them to carry away the wounded and dead.

Readers have noticed that the visual evidence does not match the verbal reports. Readers report that Fox "News" and MSNBC repeatedly show the same footage described above of bystanders carrying supposedly injured victims whose facial expressions are completely unstressed and show no pain, fear, or blood.

So has anyone seen any dead bodies? Any body bags? Any wounded taken to hospitals in ambulances? Any of the hospital wounded interviewed by TV reporters? Has any reporter checked with the morgue?

Allegedly, people inside the massacre location made cell phone calls and texted. But no one took photos or videos? Are there no security cameras? No doormen to notice a heavily armed person enter?

With 50 people killed and 50 or more wounded and reports of oceans of blood, there should be plenty of evidence Have any of you seen any of it?

One could say that the media is averse to invading the privacy of dead people and their relatives by showing dead bodies, or that the media doesn't want to show gruesome scenes -- except for the videos of Muslim terrorists cutting off people's heads. But by now the unanswered questions from the various shootings have created so much skepticism that a person would think the media would provide corroborative evidence for the official claims.

Maybe they have. As I admit, I don't watch the presstitute news.

In order to shoot 100 people, the principal weapon allegedly used, an AR-15, would have had to have been reloaded several times, a procedure that takes enough time for people to rush the shooter and overpower him.

Is it possible for one person to shoot 100 people successfully but not be able to shoot even one cop when police appear? Remember the Charlie Hebdo event. The two killers were highly professional when they wiped out the magazine staff and a policeman in the street, but later when confronted by police they were so hapless and incompetent as to suggest that they were not the same people. Remember the San Bernardino shootings. Three eyewitnesses said that the shooters were three muscular males dressed in black, not a husband and diminutive wife with a new baby.

Related Topic(s): Evidence; Media; Orlando Shooting; Truth, Add Tags
Add to My Group(s)
Go To Commenting
The views expressed herein are the sole responsibility of the author and do not necessarily reflect those of this website or its editors.