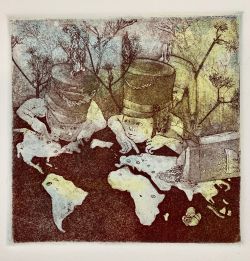 The Universe is Watching and It's Our Next Move
(Image by Akemi Ohira)   Details   DMCA
Our new colorful 116th House, with its female twist of fate, reflects the wisdom of voters refusing to throw America's pearls before swine willing to flagrantly discard human decency - including to those from any of the, 3 Mexican Countries but Americans need to get serious, because Trump, and his administration are less joke and more dangerous threat to our nation, our planet and our children.

Cure: 2020 Election and a new, New Deal, that snatches, love thy neighbor as thyself, from the jaws of this inhumanity to humankind.

Usually , live and let live has nurtured our ability to learn, adapt and indeed transform ourselves and the lives of others. However, that which has always dwelt among us, albeit in the deep darkness of fear that breeds envy and hate, has been exposed by a new kind of, dawn's early light, that blinds many to our increasing polluted water, weather extremes and a level of insensitivity to nature's food chain, that is suicidal.

Nonetheless, that so many are listening to a twenty-nine-year old female Freshman Congresswoman from New York, who isn't afraid of either scientific truth or saying, Socialism, bespeaks as much about American potential as it does hers - and confirms our everlasting trust in the ingenuity and genius of every hue, politics and true vision we hold as self-evident.

Sadly, however, our ward, Earth, is in disarray and disrepair stressed in part by the lies we tell ourselves, for the real con is that with which we trump our curiosity, creativity and compassion.

It isn't so much that, the inmates have taken over the asylum, but that America's promise to be a, home of the brave asylum for the huddled masses yearning to breathe free, has been conned out of Lincoln's some of the people you can fool all of the time.

American presidents who were great statesmen can be counted on one hand; good ones on two; and despite GOP canonization of Reagan, perfect ones, zip.

Nonetheless, on Election Day, presidents are what both voting, and non-voting, Americans hope for or fear most - which brings us back down to an earth going down at the hands of confidence artists dealing out so many still-born pledges, good people are being turned into clones dismantling the very thing they seemingly crave most - America's prestige.

As for impeaching our Stonewalling-In-Chief, careful what you wish for, because the apathy of the devil we know, is better than the devil waiting in the wings believing he is the foreplay before Second Coming ecstasy.

If neither stymied nor delayed, rippling climate effects will rob quality of life from deniers, Corporatism's defenders, Coal Ash providers, and praying grandmothers alike because unlike Republican Senators, earth's changing climate will indiscriminately embrace everyone, regardless of bank balances or sexual and political proclivities.

Perhaps it's time to, passionately pursue a life of excellence, reigning in the reins that diminished life on earth, and as advisors, mentor and nurture those who now must stop stubborn gray-haired men who continually Mitch McConnell the renewal of the American spirit that has now, against all GOP obstruction, produced an energized forward-looking generation.

In future elections, let's rekindle that famous Franklin Delano Roosevelt smile that shepherded America's, Greatest Generation through Depression and world war, and being brave in a Land of the Free win Russian-free elections.

When we courageously grasp the torch passed to a new generation by a president who, arguably, saved humanity and earth, we become the next human chapter of Profiles in Courage compassionately driven to save the world, for all of God's Children.

By simply accepting responsibility for not living our Gettysburg Address, fulfilling our Statue of Liberty promise and failing to do the one thing the universe asked of us: to look after the earth as good stewards we can elect to replace our current morally bankrupt, bullying White House cheat and his team of national security risks.

Self-preservation and the power of faith in education will yield wisdom that will touch the world, even if the greed of Wall Street lobbyists and conservative fears impede our saving the earth.

If we fail to listen to our collective reason-based conscience, now reawakened by, The Green New Deal resolution inspired by Virginia and Alexandria Ocasio-Cortez, it will become increasingly difficult to find enough clean water to throw at, buried in the sand faces.