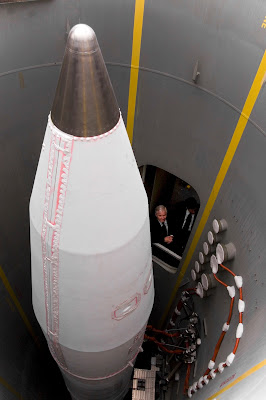 
The Obama administration's announcement that a "missile defense" base on the east coast of the U.S. will now be studied is the perfect example of a corporate-driven "solution" searching for a problem.

The studies have been justified by the supposed "nuclear threats posed by North Korea and Iran".   Using North Korea and Iran as justification for new missile defense deployments is sketchy since neither of those nations currently have the ability to launch a rocket able to reach the continental U.S.   Nor would they likely fire one even if they had the capability considering the massive nuclear response that the U.S. could then unleash.

These missile defense systems have not been proven to work.   When Obama first became president he in fact decided to de-emphasize this Boeing-led program because it had failed to effectively perform during testing.   This new decision to ramp up the ground-based mid-course interceptor program appears to be a political decision. It indicates that Boeing has secured enough Congressional support to put the program in gear once again.

This entire story is a great illustration how our democracy, and our economy, have become captives of the military industrial complex.   We are reminded of Dwight Eisenhower's warning to us to "beware' of the power of the weapons industry.   Further attacks on social progress in the U.S. will be necessary to pay for these boondoggle deployments.

Every year, the U.S. Space Command holds war games to practice a first-strike attack on China.   Both Russia and China have repeatedly complained about U.S.-NATO missile defense deployments that are now surrounding their nations.   Russia has threatened to pull out of the New Start Treaty (Obama's 2011 agreement with Russia for modest nuclear weapons reductions) because of U.S. "missile defense" deployments.

North Korea and Iran thus have become convenient excuses for the Pentagon to develop systems that are recreating the Cold War with Russia and China.

Maine Veterans for Peace has also recently taken a position to join the Global Network in opposing any "missile defense" base in the state and pledges to help build opposition against it.

Related Topic(s): Economy; Korea; Military; Obama; Peace; Pentagon; Rocket; Russia, Add Tags
Add to My Group(s)
Go To Commenting
The views expressed herein are the sole responsibility of the author and do not necessarily reflect those of this website or its editors.