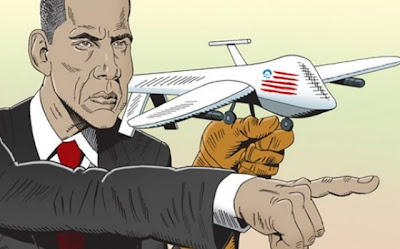 The United States can lawfully kill a U.S. citizen overseas if it determines the target is a "senior, operational leader" of al-Qaeda or an "associated group" and poses an imminent threat to the United States, according to a Justice Department document published late Monday by NBC News.

"This is a chilling document," said Jameel Jaffer, deputy legal director of the American Civil Liberties Union. He called the document a "profoundly disturbing" summary of "a stunning overreach of executive authority -- the claimed power to declare Americans a threat and kill them far from a recognized battlefield and without any judicial involvement before or after the fact."

This issue is now rising to prominence as the national spotlight begins to shine on Obama's immoral and un-Constitutional drone program. On Thursday, John Brennan has his confirmation hearing where the Senate will go through the motions to decide if he should run the Central Intelligence Agency. Since he's the brains behind the drone war it will be interesting to watch how deeply the Senate probes and if they find the courage to defend the Constitution.

Brennan is currently Obama's chief counter-terrorism advisor. Obama wanted  to appoint Brennan as director of the CIA back in 2008. Brennan, however, pulled his name from consideration because of his controversial support for torture and extraordinary rendition to other countries where torture is commonplace and federal and international laws do not apply.

Related Topic(s): Al-Qaeda; Senate; Torture, Add Tags
Add to My Group(s)
Go To Commenting
The views expressed herein are the sole responsibility of the author and do not necessarily reflect those of this website or its editors.