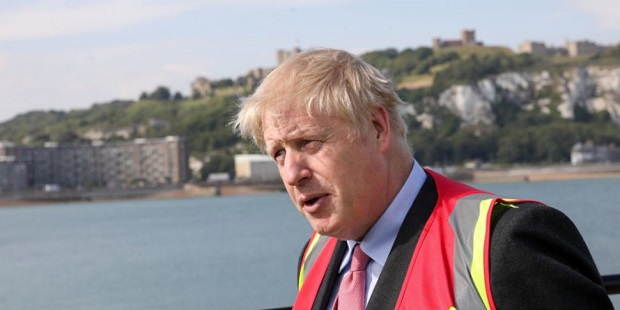 Shortly before proroguing Parliament, British Tory Prime Minister Boris Johnson was ordered to release a classified report titled Operation Yellowhammer, a government-wide survey of how a no-deal British exit from the European Union (Brexit) would affect citizens of the United Kingdom and its territories, including three crown dependencies. The document that was officially released by the British government contains a redacted paragraph (number 15). However, WMR was able to obtain the paragraph and included it in our unredacted copy of the Yellowhammer document.

Fascists and proto-fascists like Johnson and his British supporters, including Brexit Party leader Nigel Farage, and Donald Trump thrive on chaos. Britain's wartime fascist leader, Oswald Mosley summed up British fascism as a desire to create order out of chaos. Of course, fascists must create chaos where none exists in order to achieve their goal of what Mosley described as "order and authority." Mosley's present-day disciples, including Johnson, Farage, Leader of the House of Commons Jacob Rees-Mogg, Foreign Secretary Dominic Raab, Home Secretary Priti Patel, Chancellor of the Exchequer Sajid Javid, and others, believe that a hard Brexit from the EU will create the chaos on which fascism expands and thrives. The Brexiteers' fascism, coupled with far-right English nationalism, will create a virtual "Airstrip One," George Orwell's appellation for the British Isles in his landmark novel, "1984."

Operating from behind the scenes is Johnson's personal assistant, a shadowy Stephen Miller-like character named Dominic Cummings. Cummings, who lived in Russia between 1994 and 1997 and speaks Russian, has been rumored to be a Russian intelligence asset. Cummings was one of the key strategists who oversaw the successful Brexit referendum outcome in 2016. Cummings acts as Johnson's enforcer against opposition Members of Parliament and members of the media.

What the "Official Sensitive" Yellowhammer document, produced by the UK Treasury, describes is chaos across the UK if the country crashes out of the EU without a deal between London and Brussels on October 31 of this year. Anti-Brexit protests and counter-protests across the UK are foreseen as absorbing "significant amounts of police resources." Also predicted is a "rise in public disorder and community tensions." This scenario is, of course, gives a green light to fascists in the present British government and Brexit Party and UK Independence Party (UKIP) hooligans and provocateurs to take the actions necessary to justify the imposition of greater domestic security controls throughout the UK, particularly in anti-Brexit regions like Scotland, Northern Ireland, parts of Wales and north England, and Cornwall.

In addition to the Operation Yellowhammer document, which describes a "worst-case scenario," there are two other classified reports on the impact of a no-deal Brexit. One is Operation Kingfisher, which is a prediction of Brexit's impact with a sizable British governmental support package for impacted British businesses. The other is Operation Black Swan, a national disaster scenario that can be described as a "Yellowhammer Plus."

The document also acknowledges the growing threat of climate change in warning that severe autumn and winter weather could "exacerbate a number of impacts" of Brexit and "stretch resources of partners and responders." It cannot be stressed enough that the relationship between the effects of Brexit and climate change were drawn up by the Conservative government of former Prime Minister Theresa May, which stands in sharp contrast to the inane rantings by Trump that climate change is a "hoax."

Yellowhammer foresees the worst chaos at English ports, particularly horrendous cross-Channel congestion of Heavy Goods Vehicles (HGVs) in Kent and in France. This disruption will have immediate effects on supplies of medicines and medical goods in the UK. Also impacted will be veterinary medicines, thus impacting animal health and welfare and human food safety. The Brexiteers are also setting themselves up to stealing Christmas this year. Yellowhammer prognostications are that Brexit will place the agri-food supply chain under the most pressure during Christmas, the busiest time of the year for food retailers. Yellowhammer foresees "panic buying" during the Christmas season. Low income groups will be "disproportionately affected" by price rises in food and fuel. A disruption of the chemical supply chain could also affect the public's access to clean water. Also at risk is the adult social care industry in the UK due to shortages of medicines and non-UK staff being forced to leave the UK due to canceled contracts.

Fuel supply disruption in London and Southeast England emanating from traffic queues in Kent blocking the Dartford channel crossing are estimated to lead to local fuel shortages in other parts of the country. EU tariffs on British fuel exports to the UK are seen to result on refinery shutdowns, job losses in the refining industry, and labor strike action. This is what was included in paragraph 15, which what was redacted in the version of Yellowhammer released to the public. In addition, Yellowhammer foresees public protests, including "direct action road blockages." Also predicted is a rise in the activities of the "illegitimate economy"the black marketparticularly in border communities. It is feared that a no-deal Brexit without a "backstop" for the Northern Ireland-Irish border will see the return of terrorist and smuggling by the radical elements of the Irish Republican Army.

In addition to cross-Channel disruption, enhanced immigrations controls mean passenger delays at England's St. Pancras, Cheriton (Channel Tunnel), and Dover train stations, as well as for arrivals and departures at UK airports. The fact that the sharing of law enforcement data between the UK and EU will be disrupted means longer lines at immigration checkpoints, including at the border between Northern Ireland and the Republic of Ireland. The loss of EU citizenship by UK nationals on the continent and in Ireland will accentuate the overall immigration chaos. Also impacted will be the British territory of Gibraltar. With a hard border being re-imposed on the Spanish-Gibraltar border, there will be significant disruption of food, medicines, trans-border removal of waste from Gibraltar, and worker and tourist travel. Supply chain disruption is also expected to affect the Channel Islands of Jersey and Guernsey, as well as the Isle of Man.

An increase in illegal fishing by EU and European Economic Area (EEA) trawlers in English, Scottish, Welsh, and Northern Irish waters is predicted by Yellowhammer. Armed clashes between UK and non-UK fishing vessels is seen as a distinct possibility with UK maritime agencies being distracted by civil disorder at ports and illegal migration and smuggling.

Yellowhammer states as a fact that "cross-border UK financial services will be disrupted." That dire warning came from Her Majesty's Treasury. In addition, the flow of personal data between the UK and EU means that data transfers will be blocked. This, coupled with the disruption in financial services, could mean that automatic teller machine (ATM) services and insurance payments between the UK and EU will be impacted.

Related Topic(s): Boris Johnson; Brexit; Chaos; Fascism; Fascist; Foreign Minister Boris Johnson; Nationalism; Panic; Parliament; Trump, Add Tags
Add to My Group(s)
Go To Commenting
The views expressed herein are the sole responsibility of the author and do not necessarily reflect those of this website or its editors.