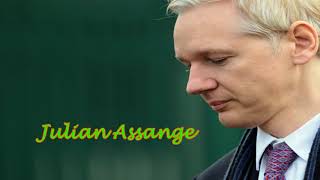 Trump could put an end to this persecution of Assange in a second !
(Image by YouTube, Channel: Julian Assange)   Details   DMCA

Former British ambassador Craig Murray has published a very disturbing account of Julian Assange's court appearance yesterday which I recommend reading in full. There have been many reports published about Assange's case management hearing, but the combination of Murray's prior experience with torture victims, his familiarity with British courts, his friendship with Assange, and his lack of reverence for western power structures allowed for a much more penetrating insight into what happened than anyone else has been able to provide so far.

Here is a small excerpt:

"Before I get on to the blatant lack of fair process, the first thing I must note was Julian's condition. I was badly shocked by just how much weight my friend has lost, by the speed his hair has receded and by the appearance of premature and vastly accelerated ageing. He has a pronounced limp I have never seen before. Since his arrest he has lost over 15 kg in weight.

"But his physical appearance was not as shocking as his mental deterioration. When asked to give his name and date of birth, he struggled visibly over several seconds to recall both. I will come to the important content of his statement at the end of proceedings in due course, but his difficulty in making it was very evident; it was a real struggle for him to articulate the words and focus his train of thought.

"Until yesterday I had always been quietly skeptical of those who claimed that Julian's treatment amounted to torture even of Nils Melzer, the UN Special Rapporteur on Torture and skeptical of those who suggested he may be subject to debilitating drug treatments. But having attended the trials in Uzbekistan of several victims of extreme torture, and having worked with survivors from Sierra Leone and elsewhere, I can tell you that yesterday changed my mind entirely and Julian exhibited exactly the symptoms of a torture victim brought blinking into the light, particularly in terms of disorientation, confusion, and the real struggle to assert free will through the fog of learned helplessness."

Related Topic(s): Cowardly Journalism; Danger; Julian Assange Imprisonment; Persecution, Add Tags
Add to My Group(s)
Go To Commenting
The views expressed herein are the sole responsibility of the author and do not necessarily reflect those of this website or its editors.