Heinous. Savage. Ghastly. It's hard to find the words to describe the act of luring journalist Jamal Khashoggi into a Saudi consulate in Istanbul, suffocating him, chopping him up and dissolving his bones.

Yet a year later, governments and businesspeople around the world are eager to forgive and forget or already have.

So far, not a single Saudi official has been found guilty or punished for this crime. The Saudi government has put 11 officials on trial but these trials, which began in January and drag on behind closed doors, are a mockery of justice. The government is prosecuting lower-level officials but not the top guns who are truly responsible. The defendants have not been named but it is known that Saud al-Qahtani, a former top aide to Crown Prince Mohammad bin Salman (MbS) and the alleged mastermind of the murder, is not a defendant and the government refuses to say where he is.

And what about the crown prince himself? In a Sept. 29 PBS interview, MbS accepted responsibility for the killing because it happened "under his watch" but he denied having prior knowledge. The CIA, however, concluded in November that the prince, who maintains tight control in the kingdom, likely ordered the killing. A report by United Nations Special Rapporteur Agnes Callamard said there was "credible evidence" linking him to the murder and cover up of what she said was undoubtedly a "state killing." Still, the trials continue even though they do nothing to indict the person who gave the orders.

Opposition to War in Yemen

When Khashoggi was murdered, the outrage had a major effect on U.S. congressional support for the Saudis, manifested by growing opposition to the U.S. support for the catastrophic Saudi war in Yemen. Several key Republicans turned against MbS, not in response to the humanitarian crisis in Yemen but in response to the public outcry against Khashoggi's horrific murder.

A broad-based coalition of peace, human rights and humanitarian groups was able to convince a majority in both the House and the Senate to cut off support for the Saudi war in Yemen, a necessary step to hold MbS accountable for his complete disregard for human life. Even some of the most hawkish Republicans stepped up in response. Lindsey Graham, for example, called MbS a "wrecking ball" and voted to end support for the war, explaining in a statement, "I changed my mind because I'm pissed. The way the administration had handled [Khashoggi's murder] is just not acceptable." President Donald Trump vetoed the bills, but Congress is still trying to force the president's hand by including an amendment in the must-pass military funding bill (NDAA). 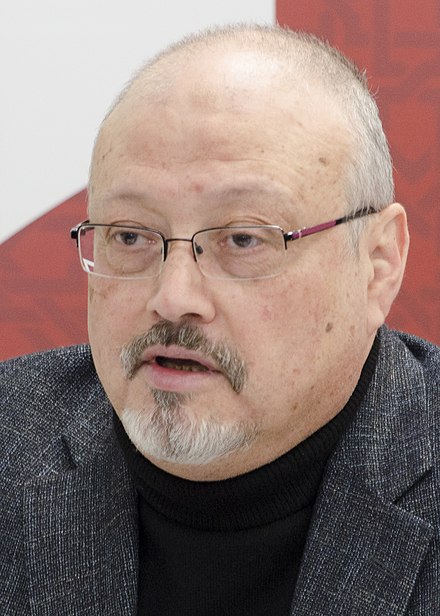 On the heels of Khashoggi's death, businesses, embarrassed by their Saudi connections, started pulling out of deals. Dozens of companies and notables, from The New York Times to Uber CEO to the head of the World Bank, decided to skip the major annual Saudi Future Investment Initiative, also known as Davos in the Desert. Talent agent Endeavor returned a $400 million investment from Saudi Arabia. Several think tanks, including the Brookings Institution and the Middle East Institute, announced that they would no longer accept Saudi funding. In the past year, five PR firms Glover Park Group, BGR Group, Harbour Group, CGCN Group and Gibson, Dunn & Crutche have severed ties with the kingdom. At the behest of groups including the Human Rights Foundation, singer Nicki Minaj canceled her performance in Saudi Arabia, citing concerns about the treatment of women, the LGBTQ community and freedom of expression. Freedom Forward was successful in getting the New York Public Library to cancel its "Youth Forum" with MbS's charity, the Misk Foundation.

Still, the Saudis have been investing huge sums of money in companies and notables to "rebrand" the kingdom, prompting CODEPINK to launch a full-blown Boycott Saudi campaign in January. The campaign includes urging entertainers not to perform, asking Vice Media to stop producing promotional/propaganda videos for the Saudis, encouraging Lush Cosmetics to close their Saudi stores and pushing the G-20 nations to reconsider their decision to hold their 2020 meeting in Saudi Arabia. The campaign's long list of targets shows just how much money Saudi invests in whitewashing its crimes and how overreaching its influence is.

While human rights groups work to hold the private sector accountable, the biggest obstacle to holding the Saudis accountable is the Trump administration continued support. Trump has focused on Saudi Arabia's key role as a purchaser of U.S. weapons and an ally against Iran. In the wake of the Sept. 14 attacks on the kingdom's oil infrastructure, Trump announced the deployment of 200 troops and Patriot missiles to Saudi Arabia to bolster its defenses against Iran.

Trump, who vetoed legislation to end military assistance for the Saudi war on Yemen on three different occasions, went so far as to declare a state of emergency to sell $8billion in weapons to the Saudis while bypassing congressional disapproval.

Related Topic(s): Arming Saudi Arabia; Business As Usual; CODEPINK; Khashoggi Slaying; Killing; Saudi Arabia Ben Salmon; Support; Weapons, Add Tags
Add to My Group(s)
Go To Commenting
The views expressed herein are the sole responsibility of the author and do not necessarily reflect those of this website or its editors.