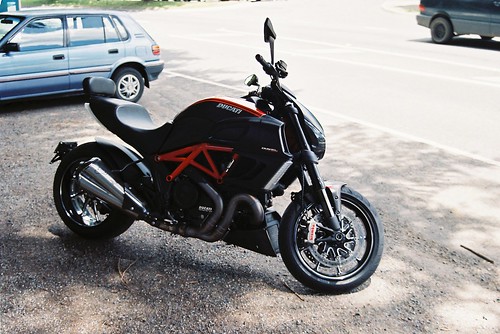 My wife says: "Why don't you get a mistress instead? Nobody ever got killed falling off a mistress."

I say: "You don't realize how glorious it is. I'm a bird on the wind. Some warm nights, I ride home through the hills singing the last of the ninth, loud. People on Little Tyler Mountain must think I'm crazy."

For the past four years, I've been a middle-aged motorcyclist. I've learned to ignore (1) office wisecracks about the male menopause, (2) Bernie Palausky's suggestions of training wheels, (3) predictions of imminent doom, and (4) the amazing number of obit page headlines that begin: "Cyclist killed -- "

Despite all that, it's marvelous. Commuting to work is a daily adventure. Driving a car is a bore to be endured only in bad weather.

It all started in 1980 when gasoline leaped to $1.40 and commuting from Cross Lanes became as costly as a cocaine habit. I rebelled and bought a 180-mpg moped.

That was an error of short duration. Fresh-air riding was delightful, but the tiny putt-putt was too weak for a 12-mile hilly trip twice a day.

In those days, the Devil's Disciples (spelled "Diciples" on their skull-bedecked jackets) hung out at the old Apple Tree Inn on Tyler Mountain. As I putted by at 20 mph, the tattooed Disciples, lounging against their Big Harleys, would whoop, cheer, and hoist their beer cans in a brothers-of-the-wheel salute. I considered applying for associate membership. But the Apple Tree burned and the Disciples left. Wonder where they are today?

The moped was traded off to a family with kids at WVU, for campus use.

Then I took the plunge. I bought an old Honda 350 from county sanitarian George Hanna and, at age 49, entered the world of cycling that others experience as teen-agers. In his block in Kanawha City, George ran alongside me shouting and waving while I fumbled with strange hand-clutching and toe-shifting. After a few hours, I soloed and braved the traffic home.

Middle age is the best time to learn cycling. Caution is abundant and speed is less a thrill. Safety articles say most deaths and injuries happen to young riders in their first month. Skill grows gradually. For me, the toughest was countersteering: turn left and the bike goes right. It's impossible, but it works.

Sunny weekends became cruising time. My four kids were smaller then. With one on the back, we'd explore lovely farm roads amid fields of cows, avoiding roadside chickens.

Riding to work presents an image problem. I solved it by parking at the back of the building, entering through the truck dock, and changing out of boots and jeans before encountering the three-piece-suit visitors always in the newsroom. The boss, Ned Chilton, is reasonably tolerant of employee eccentricity. In case he ever complains that cycling is undignified, I'm saving clippings about publisher Malcolm Forbes (worth $200 million -- twice as much as Jay Rockefeller) and his trusty bike. Forbes skidded on loose gravel the other day and got banged up. If he's smart enough to accumulate $200 million, he should be smart enough to avoid loose gravel.

Related Topic(s): Commuting; Cycling; Forbes; Men; Menopause; ROAD, Add Tags
Add to My Group(s)
Go To Commenting
The views expressed herein are the sole responsibility of the author and do not necessarily reflect those of this website or its editors.