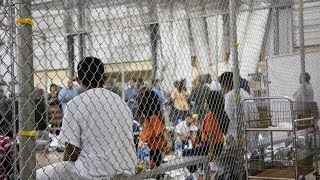 Ah, the poor Redcoats didn't have a chance against the Continental army. They had to change planes in Atlanta and missed the key battles. And their muskets wouldn't fit in the overhead bins.

According to the sitting US President, George Washington's forces captured King George's airports. Or ramparts. Rockets flared and/or glared, that much we know, and it wasn't the Space Force. Since the speech also touted the accomplishments of American inventors (like the Scottish-born Alexander Graham Bell) and specifically named the Wright brothers, you would assume The Donald knew there weren't airplanes in the 1700s. You would be wrong.

Tinyhands' July 4th tribute to himself didn't get much live TV coverage, but the video replay of what he claimed was a malfunctioning TelePrompTer was all you needed to see to know he's a still complete moron. It would be funny if he didn't have the launch codes.

What isn't funny, and never will be, is the unimaginable cruelty of the detention centers at the border. Another asylum-seeker died in custody today, the ninth death this year. We don't know how many of the missing children have died, recently released migrants. But we do know that lice, scabies, shingles, chickenpox and flu have plagued at least two border facilities, according to visiting doctors who described the serious hygiene issues that could lead to a major medical crisis. "Fake News" according to Dear Leader, who said the centers were run "beautifully" and channeling the late Babs Bush re: Hurricane Katrina suggested the squalid conditions were an improvement compared to their home countries.

"Many of these illegals aliens are living far better now than where they came from, and in far safer conditions," he tweeted. "No matter how good things actually look, even if perfect, the Democrat visitors will act shocked and aghast at how terrible things are...If illegal immigrants are unhappy with the conditions in the quickly built or refitted detentions centers, just tell them not to come. All problems solved."

Ah, those compassionate conservatives get me every time.

Trump's surrogates have been making the talk show rounds, trying to defend migrant treatment so vile it violates the United Nations General Assembly's International Covenant on Civil and Political Rights as "inhumane treatment" that causes mental and physical suffering" and deprives a person "of their liberty" and "dignity." Kevin McAleenan, acting secretary of homeland security, and Kenneth Cuccinelli II, acting director of U.S. Citizenship and Immigration Services, are supporting the "FAKE NEWS" Trump mantra.

Asked by ABC News about a report by The New York Times and The El Paso Times in which Border Patrol agents and others who had visited a facility in Clint, Tx., described crying children, cases of chickenpox, scabies and shingles, and inadequate medical care, McAleenan dismissed the details as "unsubstantiated." Trump called the report about the Clint facility a "hoax." The Times said stood by the article, saying, "We are confident in the accuracy of our reporting on the U.S. Border Patrol's detention centers." the statement said. McAleenan and Mark Morgan, acting commissioner of Customs and Border Protection, have been called to testify this week before the House Oversight and Reform Committee to discuss the concerns.

The world will be watching as these monsters defend the abuse and neglect these children are suffering in our names at our hands. This Friday the 12th you can join a global day of protest against this depraved policy. Lights For Liberty has a schedule of vigils all over America and abroad. Find one.

Kathy never expected a career in radio as a talk show producer. Born and raised in Atlanta, Georgia, Kathy was completing her nursing degree when in 2001 - in an emergency - she was asked to fill in as the producer of Mike's program. Within a few (more...)
Related Topic(s): Children; Cruelty; Detention; Issues; Medical; Trump, Add Tags
Add to My Group(s)
Go To Commenting
The views expressed herein are the sole responsibility of the author and do not necessarily reflect those of this website or its editors.