The film, Queen of the Desert, begins with a distant image of a small group of travelers moving across a vast desert. Two sentences flash across the screen, setting the stage for what is to follow:

"The onset of the First World War hastened the demise of the Ottoman Empire, which had ruled the Middle East for five centuries. The colonial powers set their eyes on dividing the spoils."

The film then moves to a small room in which British army officers gather around a table with a minister from the War office, the future British Prime Minister, Winston Churchill.

The officers reluctantly agree among themselves, "That woman." 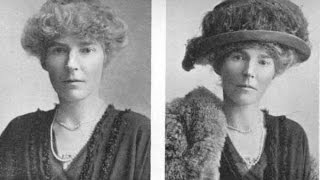 "That woman" is Gertrude Bell (above, left), a British archaeologist, writer, traveler, and a diplomat, who worked in a time of intense Western colonialism.

After a delay of two years, the public finally has a limited DVS access to a motion picture that rescues Bell from the history books and should introduce her to a wider public.

The film is Queen of the Desert, based on the real-life story of Gertrude Bell (1868-1926) (Nicole Kidman), a humanitarian among those human colonialist scorpions who were roaming the deserts in search of prey and profits.

To the indigenous people of the region, Bell is better known, and far more appreciated, than T. E. Lawrence, portrayed by Peter O'Toole in David Lean's 1962 film, Lawrence of Arabia.

The difference between the two? Bell was a woman and a natural diplomat, while Lawrence was a male warrior, glamorized through David Lean's film.

Lean's film rescued Lawrence from oblivion, which Queen of the Desert should have done for Gertrude Bell. It has failed to do so, not because of its lack of merit, but because the film industry determines what it thinks will sell.

Our popular understanding of history is shaped through popular culture, where films, television and now, social media, play definitive roles.

Military exploits have a greater popular appeal than diplomacy, while a film depicting Arab history as it really was, colonial exploitation of indigenous populations, goes against the popular narrative.

Related Topic(s): Amazon; History; JOURNEY; Netflix; Women In Movies, Add Tags
Add to My Group(s)
Go To Commenting
The views expressed herein are the sole responsibility of the author and do not necessarily reflect those of this website or its editors.