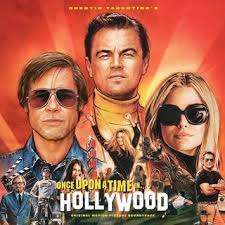 Last night my wife and I accompanied Peggy's brother to a local theater to see Quentin Tarantino's "Once upon a Time in Hollywood." All of us came away disappointed and wondering why we didn't leave the theater about half an hour into this two-hour-forty-five-minute marathon, even though it featured A-list actors including Leonardo DiCaprio, Brad Pitt, Margot Robbie, and Al Pacino. We all agreed that the film was too long, too slow, too violent, and on the whole seemed pointless.

I'm glad we didn't leave. After-thought has made me realize that we would have missed a thought-provoking and revealing parable about entertainment-fantasy and its influence on our lives. Even more, the film had the epic quality of all the great classics, Homer's Odyssey, Virgil's Aeneid, Dante's Divine Comedy, and Lord Tennyson's Ulysses. It was about our lives' journeys, their purpose, about love and friendship.

After all, the film's very title alerts the viewer to Tarantino's larger intent. "Once upon a time" is the way all fairy tales, myths, legends, and fables begin. They are vehicles for teaching larger truths -- for rewriting history. Typically, they feature:

Significantly, "Once upon a Time in Hollywood" is set in 1969, the year of the bloody murder of actress, Sharon Tate, her unborn child, and four of Tate's friends at the hands of the infamous Charles Manson family of hippie stoners. In fact, the whole story can be understood as a commentary on that tragic event as encapsulating American life with its senseless violence specifically provoked by the art of directors such as Quentin Tarantino. As such Tarantino's own film is a kind of self-parody yet another feature often characterizing the great literature just referenced.

"Once upon a Time in Hollywood" is about a washed-up TV actor, Tom Dalton and his stunt-man double, Cliff Booth. Tom's an actor whose identity has been fixed by the success of his past role as an old West bounty hunter. Everybody knows him that way. But in mid-life, he suddenly finds himself jobless, filled with self-doubt and lacking clear direction. He wants to maintain his Hollywood image and lifestyle and is terrified with the prospect of losing them. Who is he without his on-screen role? He's afraid of death and life's inevitable call to enter its second half.

Meanwhile, Tom's stunt-man double (his real self) is a doer. He's entirely capable of accomplishing in real life, what Tom does only in film. Whereas Tom pretends to be brave, take chances, fall off horses, fight and prevail, Cliff actually does those things. What's more, Cliff's not worried about his image or living large. He's content to be in effect Tom's butler and chauffeur. His home is a beat-up Airstream trailer; he eats Kraft Macaroni, and his only companion is his fierce and obedient pit bull, Brandy. The dog is actually Cliff's better half; like his master, he's simple, faithful, loving, and valiant. Brandy is to Cliff what Cliff is to Tom.

So, shadowed by his double and better-self, Tom sets off on his journey. Tarantino drives the theme home by introducing virtually every character in terms of their footwear cowboy boots, sandals, go-go boots, and bare feet. Everybody's on a journey. Tom's own has him advised by standard Hollywood types always telling him how to cope with life's changes by adopting new roles, different costumes, makeup, facial hair, and public image. For them, everything is image and performance.

However, Tom's best professional advice comes from an eight-year-old girl far wiser than her years. Trudi Fraser tells Dalton to sober up, pay attention to his craft, be true to himself in the roles he plays, and never break character. As a result of listening to her, Tom delivers his greatest performance in a film called Lancer. For him, it's the turning point in his professional journey. Yet, we find, there's much more for him to learn. Life's not merely about professional success.

It's his better self, Cliff Booth, who makes the deeper discovery. And ironically, it's the Manson Family who conveys that truth. Led on by a flirtatious Siren, Cliff suddenly finds himself in the midst of the Manson family. Significantly, they live in an abandoned movie lot owned by a decrepit rancher, George Spahn.

Over the objections of the Manson Family members, Cliff insists on consulting his former colleague who turns out to be a blind oracle revealing life's true meaning. Spahn is Booth's interior voice who's deeply asleep and must be shaken back into awareness. Sightless, old George can't even remember his former meaningless life. He doesn't recognize Booth or remember who Tom Dalton is. He only knows that Squeaky Fromme (Manson's best-known disciple) loves him and that he wants to please her. Loving her is what's truly important to him, nothing else.

Moreover, the Manson community itself teaches Booth. It proves to be deeper and more loving than the Hollywood assemblage of self-seeking individuals that the Manson Clan mirrors. Yes, they spend their lives in exactly the same way of their better-off counterparts. They even live on an abandoned movie lot and pass their days watching old movies on TV. For them, it's all sex, drugs, and rock and roll.

However, overwhelmingly composed of women, the Mansons have abandoned the Culver City rat race. They dumpster-dive for food and hitch-hike for travel. But more importantly, they exhibit solidarity, sympathy and support for members who suffer or are in danger.

The contrast leads them on the one hand to resent the actual self-centered lives of Hollywood personalities, and on the other to imitate their on-screen violence. (Here's where the class-struggle comes in.) They reason: The films we've watched from childhood have taught us lessons. The actors we've admired have advocated senseless violence, and they live like over-consumptive, selfish pigs. So, let's get our revenge and do some violence on them."

And that brings us to Tarantino's ironic, over-the top, cleansing and healing climax. (Spoiler alert!) In a riot of shooting, stabbing, beating and burning, Hollywood's fantasy triumphs over real life. The heroic dog, Brandy comes to the rescue; the Mansons are decimated; Sharon Tate, her child and her friends are saved. History is re-written.

But more importantly, in terms of Tarantino's fabulous intent, Tom Dalton and Cliff Booth discover their actual identity with one another. The two halves of Tom's personality are united in expressions of their deep friendship. Tom gets over himself and joins a larger community of literally resurrected souls.

Related Topic(s): Classics; Community; Hollywood; Love; Movies; Once Upon A Time; Parable; Purpose; Resurrection; Theater; (more...) Violence, Add Tags  (less...)
Add to My Group(s)
Go To Commenting
The views expressed herein are the sole responsibility of the author and do not necessarily reflect those of this website or its editors.