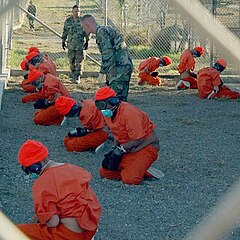 
US President Barack Obama does not have the courage to face the hardliners in the Defense Department who don't want to start a precedent by releasing one of the 116 prisoners at Guantanamo, Ray McGovern, a former CIA officer, told RT.

Tariq Ba Odah, a Saudi resident of Yemeni descent, has been held in the Guantanamo detention facility since 2002. In 2009, he was cleared for release by the Obama administration, but he remains in custody. In 2007, he went on a hunger strike to protest his indefinite detention without charge. After more than eight years without taking food voluntarily, he weighs less than 34 kilograms and may soon die, his lawyer says.

RT: Let's start with the case of Ba Odah. He was cleared for release, is in critical condition, and is at 56% of his ideal body weight. So why won't the US let him go?

Ray McGovern: There are several reasons, the most important of which is that the president does not have the courage to face the hardliners in the Defense Department and also, I have to say, in the Department of Justice, who are afraid if he is let go that many of the other 116 prisoners at Guantanamo will also go on the kind of hunger strike that he has been on and there will be a lack of order in Guantanamo. He is on the equivalent of... administrative detention, which is something that the Israelis favor; they actually have more people in administrative detention than we have at Guantanamo.

There used to be a sacrosanct principle in international law going back 800 years to the Magna Carta, and that was habeas corpus. Now, this government, and the US... does not think it very applicable. And if the president were to simply say to Loretta Lynch, the Attorney General: "Look, this is enough of an embarrassment, do not oppose his writ for habeas corpus," this man would be let go. But the precedent would be set that you could try to starve yourself to death as the only way out of Guantanamo and there's a chance you might actually get out... at half your normal weight, but at least alive. That's what they don't want to risk...

Now [Obama] can make wars without Congressional approval, in violation of Article 1 of our Constitution. Why can't he abide by the hallowed concept of habeas corpus -- 800 years old -- which is also part of our Constitution? It's because he lacks the courage.

RT: President Obama is leaving office soon, is there any hope he will fulfill his promise to close Guantanamo?

RM: He can achieve his goal in two ways. One is in consonance with US law -- law passed by US Congress -- he can instruct his Defense Secretary to withhold any objection. These people are no threat to anyone. Once the Defense Secretary says he is not a threat to anyone in the US, he can go; he's already been approved for release for six years. Now, what happens then? Then they have to find a place to put him. Well, if we can lean on countries to do much more important things at our bidding, we can certainly find one country among the 175 that exist in the world to take this prisoner. So, all the president would have to do is say: "Declare him not a threat to US citizens." He would be let go and the State Department would find some place that would accept him: Mission accomplished.

The other way he could do it is simply say to the Attorney General: "This getting really embarrassing. I used to be a lawyer and -- habeas corpus -- it's really just too embarrassing. For Pete's sake, do not oppose his writ of habeas corpus, this is really getting very embarrassing." So, she would let him go. The Department of Justice, of course, has a bunch of lawyers -- including the ones who justify torture (and I would say that force-feeding has been universally recognized as a form of torture), the same lawyers that justified the other kinds of torture are justifying that, and if the President is not able to lean on them, how can he expect the new Attorney General to do the same? The president has shown some courage on Iran, but at the expense of all other endeavors, and this one is particularly embarrassing.

RT: There are reports the US military is assessing sites on American soil for a possible transfer of inmates from Guantanamo. But many of them have faced no charges. Will that change if they are held in mainland US facilities?

rt.com is Russian television, which actually does a great job reporting on US news too.
Related Topic(s): Detainees; Guantanamo Prison; Habeas Corpus; Rights, Add Tags
Add to My Group(s)
Go To Commenting
The views expressed herein are the sole responsibility of the author and do not necessarily reflect those of this website or its editors.