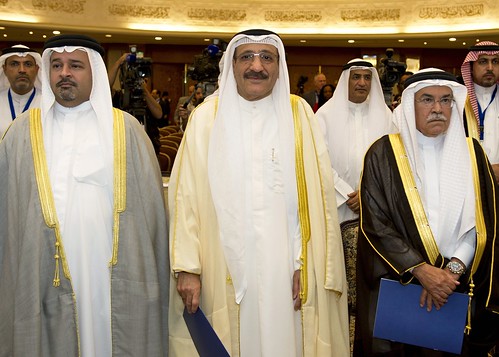 KUWAIT-OIL/
(Image by Tribes of the World)   Details   DMCA

The Gulf Arab states - Saudi Arabia, the United Arab Emirates, Kuwait, Qatar, Bahrain and Oman - will borrow a record amount this year to help cover budget deficits expected to add up to about $490 billion over the next three years, according to S&P Global Ratings reported by Bloomberg.

For the five oil-reliant members of the Gulf Cooperation Council (GCC), the dual shock of the coronavirus pandemic and lower crude prices means sovereign balance sheets may "continue to deteriorate up until 2023," analysts including Trevor Cullinan said in a report Monday.

Debt will probably be used to finance about 60% of the central government fiscal shortfalls in 2020-2023, with asset draw downs used to cover the rest.

S&P predicts the GCC states will borrow about $100 billion and use up another $80 billion in government assets to cover this year's financing requirement. Annual debt issuance will reach $70 billion by 2023 under the assumption that Saudi Arabia narrows its fiscal shortfall over the period.

"Most GCC sovereigns have demonstrated ready access to the international capital markets this year, and are in the enviable position of having substantial pools of external liquid assets to fund their fiscal deficits should market access become constrained," S&P said.

All but debt-free before crude prices nosedived in 2014, many Gulf governments have increasingly come to count on borrowing while making only halting efforts to cut spending and diversify their economies. Saudi Arabia has largely relied on debt to cover its deficit this year, and countries from Bahrain to Qatar have also tapped the bond market.

S&P said Oman will likely follow in its neighbors' footsteps and borrow in the second half of the year as global economic conditions improve and oil prices recover. In the absence of debt issuance, the Omani government would likely liquidate some of its financial assets, which S&P estimates at about 55% of gross domestic product in 2019.

The end of the Arab world's oil age is nigh: Economist

The Economist says that the Arab world's oil era is over and its pain will be felt across the region.

Algeria needs the price of Brent crude, an international benchmark for oil, to rise to $157 dollars a barrel. Oman needs it to hit $87. No Arab oil producer, save tiny Qatar, can balance its books at the current price, around $40, according to the Economist.

In May the Algerian government said it would slice spending in half. The new prime minister of Iraq, one of the world's largest oil producers, wants to take an axe to government salaries. Oman is struggling to borrow after credit-rating agencies listed its debt as junk. Kuwait's deficit could hit 40% of GDP, the highest level in the world.

Covid-19 sent the price of oil plummeting to all-time lows as people stopped moving around in order to limit the spread of the virus. With commerce resuming, the price has ticked backup, though a peak in demand may be years away.

The world's economies are moving away from fossil fuels. Oversupply and the increasing competitiveness of cleaner energy sources mean that oil may stay cheap for the foreseeable future. The recent turmoil in oil markets is not an aberration; it is a glimpse of the future. The world has entered an era of low pricesand no region will be more affected than the Middle East and North Africa, the Economist said.

Arab leaders knew that sky-high oil prices would not last forever. Four years ago Muhammad bin Salman, the de facto ruler of Saudi Arabia, produced a plan called "Vision 2030" that aimed to wean his economy off oil. Many of his neighbors have their own versions. But "2030 has become 2020," says a consultant to Prince Muhammad.