Everyone who follows politics even lightly knows about Judge Brett Kavanaugh and his nomination to a seat on the Supreme Court of the United States. He was chosen for that slot by the far right Federalist Society and the far rightist Tom McGahn, the not-much-longer-to-be White House Counsel, who was given to Trump primarily to be the filter of Federal court nominations at all levels as well as participating in the process of choosing cabinet and sub-cabinet nominees for positions from which they can procced to tear apart Federal regulations at levels, the Bannonite "Deconstruction of the Administrative State." McGahn has been very successful in carrying out both of those tasks.

As is well-known to date, Kavanaugh has slipped through the Senate hearings by failing to answer any key questions, aided in trying to make himself a cipher by the withholding of a mountain of documents (?100,000 pages?) pertaining to his actions and activities when he worked for the G.W. Bush White House. However, one can be sure that, regardless of what he said at the hearings, he is Hard Right. He was picked because once on the Court he would vote to overturn Roe v. Wade, would like do the same for Obergefell, would be very liberal (ho, ho, ho) when it comes to granting a President dictatorial powers (that is unless he/she is a Democrat). He would be a threat to racial justice and voting rights(for other than whites) and would be pro-business when it comes to the matter of government regulation. The Washington Post listed 12 questions that Kavanaugh would not answerduring the confirmation hearings, while the People for the American Way outdid them by listing "21 Ways Kavanaugh threatens the American Way" (email of Sept. 4, 2018). 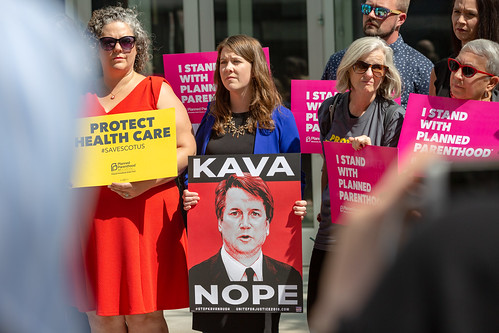 From flickr.com: Protesters against the confirmation of U.S. Supreme Court nominee Brett Kavanaugh outside the Warren E.
(Image by Lorie Shaull)   Details   DMCA

But then came the shocking charge (well, to some of us it was shocking) that as a teenager, Kavanaugh (then 17, and quite drunk) had sexually assaulted an underage girl (of 15). Makes Clarence Thomas with his pubic hairs on Coke cans look like someone holding back. There has been a huge amount of commentary on this one, of course, and of this writing, on Thursday, Sept. 20, 2018, at about 6:30 PM. It is still unclear whether Dr. Baisley Ford will appear before the Senate Judiciary Committee and under what provisions. But in this space, I am going to share with you edited versions of Tweets that I posted as the process moved along (all at: https://twitter.com/tpjmagazine), plus a couple of other brief comments.

1. On Sept. 16: Some say that Susan Collins is STILL undecided on Kavanaugh. (can|AT|prochoiceamerica.orgEmail address). Susan Collins, a down-the-line Repub. when it counts for the Repub. party (and for protecting herself from a further right-wing primary challenger in 2020), who likes to pretend that she isn't, is undecided about only one thing: what is the best way to pretend that she is "still" undecided about Kavanaugh.

2. After the original confidential letter from Dr. Baisley Ford to Sen. Diane Feinstein, in which she asked the Senator to keep her name hidden, became public, and Judge Kavanaugh denied that anything like what Dr. Ford claimed had happened could possibly have, I had this to say in a Tweet about who is telling the truth (Sept. 18):

IF Kavanaugh did this, is it logical to assume that that was the only time, in a drunken stupor, he attacked a girl who then felt that she was going to be raped? Or does one have to wonder, as in the [Justice] Clarence Thomas/Anita Hill case, how many others are there out there.

"On Monday, Sen. Orrin Hatch (R-UT) said that he didn't believe Donald Trump's Supreme Court Nominee Brett Kavanaugh intentionally tried to rape Christine Ford when they were both teenagers. However, the Senator also tried to downplay the significance of the allegations being true. 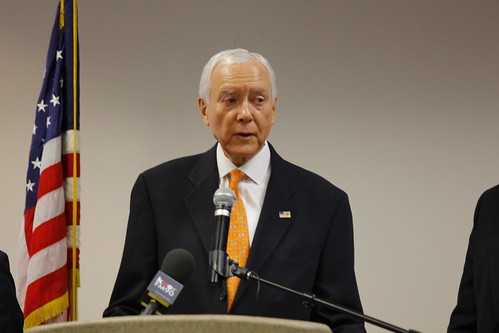 "'NBC News' Leigh Ann Caldwell reports that Hatch said that he had spoken with Kavanaugh and the nominee came across to him as 'honest' and 'straightforward' as he denied Ford's accusations. Hatch also reportedly said that 'there's some question whether she's mixed up' in her recollections of the alleged incident."

Ah yes, ever the holier-than-thou Mormon, except when it is politically inconvenient to be one.

What few are asking is just why the Repubs. don't want the FBI investigating Dr. Ford's charges? Although they are claiming "time" and "delay" as factors in not ordering the investigation, it is useful to recall that a follow-up investigation in the Clarence Thomas/Anita Hill case, ordered by no less than President George H. W. Bush, took all of three days. There are, rather, two real factors here. First of all, they are very afraid of (?know?) what the FBI would find, not only about Dr. Ford's charges, but possibly about others. Really folks. If there's no there there, why did Judge Kavanaugh. spend 9 hrs. at the White House right after Dr. Ford's charge first became public and some more hours since? If there is nothing to talk about, what was all the talk about?

Steven Jonas, MD, MPH, MS is a Professor Emeritus of Preventive Medicine at StonyBrookMedicine (NY) and author/co-author/editor/co-editor of over 35 books. In addition to his position on OpEdNews as a "Trusted Author," he is a Senior Editor, (more...)
Related Topic(s): Beer; Bush; Conspiracy; Government; Investigation; Investigation; Judiciary; Justice; McConnell-Mitch; Mormon; (more...) Nomination; Nomination Holds; Politics; President; Rape; Senate; Truth; Truth, Add Tags  (less...)
Add to My Group(s)
Go To Commenting
The views expressed herein are the sole responsibility of the author and do not necessarily reflect those of this website or its editors.