Wednesday's criminal referral by 11 House Republicans of former Secretary of State Hillary Clinton as well as several former and serving top FBI and Department of Justice (DOJ) officials is a giant step toward a Constitutional crisis.

With no attention from corporate media, the referral was sent to Attorney General Jeff Sessions, FBI Director Christopher Wray, and U.S. Attorney for the District of Utah John Huber. Sessions appointed Huber months ago to assist DOJ Inspector General (IG) Michael Horowitz. By most accounts, Horowitz is doing a thoroughly professional job. As IG, however, Horowitz lacks the authority to prosecute; he needs a U.S. Attorney for that. And this has to be disturbing to the alleged perps.

This is no law-school case-study exercise, no arcane disputation over the fine points of this or that law. Rather, as we say in the inner-city, "It has now hit the fan." Criminal referrals can lead to serious jail time. Granted, the upper-crust luminaries criminally "referred" enjoy very powerful support. And that will come especially from the mainstream media, which will find it hard to retool and switch from Russia-gate to the much more delicate and much less welcome "FBI-gate."

As of this writing, a full day has gone by since the letter/referral was reported, with total silence so far from T he New York Times and The Washington Post and other big media as they grapple with how to spin this major development. News of the criminal referral also slipped by Amy Goodman's non-mainstream DemocracyNow!, as well as many alternative websites.

The 11 House members chose to include the following egalitarian observation in the first paragraph of the letter conveying the criminal referral: "Because we believe that those in positions of high authority should be treated the same as every other American, we want to be sure that the potential violations of law outlined below are vetted appropriately." If this uncommon attitude is allowed to prevail at DOJ, it would, in effect, revoke the de facto"David Petraeus exemption" for the be-ribboned, be-medaled, and well-heeled.

Meanwhile, the patience of the chairmen of House committees investigating abuses at DOJ and the FBI is wearing thin at the slow-rolling they are encountering in response to requests for key documents from the FBI. This in-your-face intransigence is all the more odd, since several committee members have already had access to the documents in question, and are hardly likely to forget the content of those they know about. (Moreover, there seems to be a good chance that a patriotic whistleblower or two will tip them off to key documents being withheld.)

The DOJ IG, whose purview includes the FBI, has been cooperative in responding to committee requests for information, but those requests can hardly include documents of which the committees are unaware. 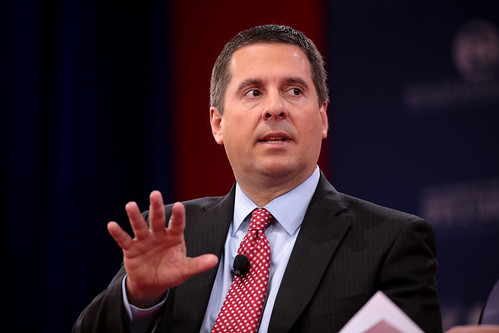 Devin Nunes, .We will put them on trial..
(Image by Gage Skidmore)   Details   DMCA

Putting aside his partisan motivations, House Intelligence Committee Chair Devin Nunes (R-CA) was unusually blunt two months ago in warning of legal consequences for officials who misled the Foreign Intelligence Surveillance Court in order to enable surveillance on Trump and his associates. Nunes's words are likely to have sent chills down the spine of those with lots to hide: "If they need to be put on trial, we will put them on trial," he said. "The reason Congress exists is to oversee these agencies that we created."

Whether the House will succeed in overcoming the resistance of those criminally referred and their many accomplices and will prove able to exercise its Constitutional prerogative of oversight is, of course, another matter -- a matter that matters.

And Nothing Matters More Than the Media

The media will be key to whether this Constitutional issue is resolved. Largely because of Trump's own well-earned reputation for lying, most Americans are susceptible to slanted headlines like this recent one -- "Trump escalates attacks on FBI ..." -- from an article in The Washington Post, commiserating with the treatment accorded fired-before-retired prevaricator McCabe and the FBI he (dis)served.

Nor is the Post above issuing transparently clever warnings -- like this one in a lead article on March 17: "Some Trump allies say they worry he is playing with fire by taunting the FBI. 'This is open, all-out war. And guess what? The FBI's going to win,' said one ally, who spoke on the condition of anonymity to be candid. 'You can't fight the FBI. They're going to torch him.'" [sic]

Ray McGovern works with Tell the Word, the publishing arm of the ecumenical Church of the Saviour in inner-city Washington. He was an Army infantry/intelligence officer and then a CIA analyst for 27 years, and is now on the Steering Group of Veteran Intelligence Professionals for Sanity (VIPS). His (more...)
Related Topic(s): Comey Book; Constitution In Crisis; Fbi-gate; Investigation; Media Bias; Media Blackout; Russiagate, Add Tags
Add to My Group(s)
Go To Commenting
The views expressed herein are the sole responsibility of the author and do not necessarily reflect those of this website or its editors.