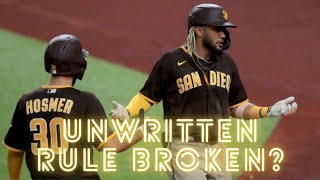 Life is full of unwritten rules. Please and thank you. Don't interrupt. Don't double dip. Flush the toilet. But is it really a rule if it's not written down? And is it really a rule if sometimes it's OK to break it? Is it a rule, say, if your young slugger hits a home run on a 3-0 pitch to put the game on ice?

The big controversy of the week, refreshingly, involved baseball. Welcome back, boys of summer.

The young slugger is Fernando Tatis Jr., who plays for the San Diego Padres. Tatis says he never heard of this rule we're about to talk about. Sounds like another unwritten rule: When in doubt, plead ignorance.

Some baseball purists, as well as the pitcher, manager and other players on the opposing team, think that Tatis broke one of the sport's long-standing unwritten rules. That is, when you're at bat and the count is three balls and no strikes, you do not swing at the next pitch. It's thought to be even more of a rule when your team is winning by a significant margin, lest you be accused of rubbing it in. (I am explaining this in a little bit of detail for those readers who may not be baseball fans.)

The Padres were leading the Texas Rangers by seven runs in the eighth inning when Tatis came to bat with the bases-loaded. He had already hit a homerun in the game. The Texas pitcher, who shall go nameless here to spare him further embarrassment, was shaky and threw three straight balls to Tatis. If Tatis followed the unwritten rule, he would not swing at the next pitch on the odds that it would be ball four, he would walk to first base and the runner from third would score. If it was a strike, he would be free to swing at any succeeding pitches.

But young Fernando gets paid good money to hit home runs and drive in runs, so he swung. The ball soared out of the park for a grand slam homerun and instead of one man walking in with a run, four Padres crossed the plate. Instantly, San Diego was up by 11 runs instead of seven runs.

The Rangers, who eventually lost 14 to 4, complained more about that swing on the 3-0 pitch the next day than how they were embarrassed by the shellacking they had just taken. But a lot of other major league players and managers who were interviewed, including a number of pitchers, said the responsibility is on the pitcher to make a good pitch in that situation and not look for an easy strike expecting that the batter won't swing. After all, in baseball, as well as other endeavors in life, the idea is to win the game and the more runs you have the more likely you will win. Also, baseball today is different from baseball a generation or two ago. Teams all have young sluggers and score runs in bunches today and seemingly safe leads are no longer safe.

So I'm with Tatis on this one. I am not a fan of rubbing it in, but even Little League doesn't say the game is over until one team is ahead by 10 runs. What's more, it turns out I'm consistent. My Facebook memories the other day included this serendipitous post: "I called the green light for Astros' Carter on 3-0 pitch. You have to know he's swinging. Boom! 3-run shot and Yankees lose. It's not a complicated game." Aug. 19, 2014. Another slugger in a situation just crying for him to swing at the three and oh.

By the way ... if you want to use politics as a metaphor for life, the Republican Party seems to have come up with an unwritten rule: Do not ever publicly speak ill of the leader. In nearly four years of the Trump Administration, four years of lying, incompetence, race-baiting, dismantling of government safeguards, disregard of the Constitution and all-around ignorance of presidential duties, I have yet to hear one local elected official publicly say a negative word about the party leader. Never mind Congress members; they fear for their "careers." I'm talking about locals. Apparently, saying he blew it on Covid would be somehow a bad thing for potential voters to hear, deaths notwithstanding. A sign of independent thought? Forbidden. They are "leaders" without courage. An odd combination. Also by the way ... the Democratic Party clearly has no such unwritten rule.

- Don't ask for something if the person only has one left gum, cigarette, piece of cake, etc.

- If you use up all of the toilet paper, you refill it.

- Don't mess up an apology with an excuse.

Related Topic(s): Baseball; Congress; Corporation Google; Fernando Tatis; Internet; Loser; Metaphor; Politics; Republican; Responsibility; (more...) Rules; Sports; Texas Rangers; Writing, Add Tags  (less...)
Add to My Group(s)
Go To Commenting
The views expressed herein are the sole responsibility of the author and do not necessarily reflect those of this website or its editors.