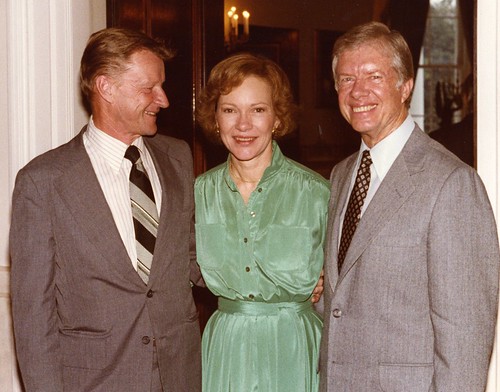 It was Brzezinski that advised President Jimmy Carter to destabilize Afghanistan in the 1980's. At the time Afghanistan's communist government was modernizing the country, developing its economy, educating its people, and improving the standard of living for millions of Afghans. It was also advancing the rights and opportunities for women, which the U.S. is constantly touting as one of its cherished human rights concerns. It was Brzezinski's destabilization project that set women's rights back hundreds of years in Afghanistan. When human rights get in the way of U.S. foreign policy objectives, then human rights lose.

In 1979 Brzezinski advised Carter to secretly authorize the CIA to give financial and military aid to further inflame Islamic fanatic mujahideen that were violently opposed to modernization. When the Soviet Union intervened militarily in support of the threatened Afghan government it was not an invasion. It was the legal response of Russia to a neighboring country that was asking for military aid against foreign backed insurgents. Today we see a similar Russian military assistance program in Syria for similar reasons against very similar villains.

Carter feigned indignation and outrage towards Russia and he put the freeze back into the Cold War. He decried the "invasion as a deliberate effort by a powerful atheistic government to subjugate an independent Islamic people", and Carter claimed it was a Russian plot to control Afghanistan's oil. Carter declared a U.S. boycott of the 1980 Moscow-hosted Olympics to punish Russia, and by doing so he dashed the dreams of U.S. athletes that had been training for 4 years in preparation for the Olympic Games. A good time was had by all in Moscow without the U.S. participation. U.S. athletes were sacrificed as pawns in Brzezinski's game of the Grand Chessboard. It is a blood soaked chessboard where the masters see flesh and blood people as objects to be toyed with.

What Brzezinski and Carter did was to set a trap that the Soviets fell into when they sent their military into Afghanistan. The trap had been laid before the Russian "invasion", and not afterwards as Brzezinski would brag years later in a 1998 interview with Le Nouvel Observateur:

"Brzezinski: Yes. According to the official version of history, CIA aid to the Mujahiddin began during 1980, that is to say, after the Soviet army invaded Afghanistan on December 24, 1979. But the reality, closely guarded until now, is completely otherwise: Indeed, it was July 3, 1979 that President Carter signed the first directive for secret aid to the opponents of the pro-Soviet regime in Kabul. And that very day, I wrote a note to the president in which I explained to him that in my opinion this aid was going to induce a Soviet military intervention."

Once events in Afghanistan were set into motion, then Carter and Brzezinski added gasoline to the inflamed Islamic fanatics with billions of dollars in U.S. military support funneled through Pakistan. Thousands of mercenaries from Arab countries poured into Afghanistan to join the fight and get paid too. They were called "Afghan-Arabs". The Brzezinski-Carter scheme would be continued under President Reagan and led to the destruction of Afghanistan, the re-subjugation of Afghan women, and millions of Afghan civilian victims of war. Afghanistan never recovered but from its ashes rose up the Taliban and al Qaeda. The mysteries surrounding the attacks on the U.S. of September 11th 2001 are unresolved. Regardless of whodunit the attacks of 9/11 would be used as justification by President W. Bush to launch another invasion of Afghanistan.

Brzezinski's egotism to show how smart he thought he was is the smoking gun of George Orwell's famous quote:

For decades the U.S. pretended that the false narrative of a Soviet invasion of Afghanistan was reality. The U.S. glorified the mujahideen as freedom fighters, when actually they were Islamic fanatics and mercenary proxies used by the U.S. and its coconspirators. The U.S. and the Saudis funded a heavily armed brand of Islamic terrorism that the U.S. though that it could control, ignore or kill off once it was no longer needed.

As Brzezinski also said in that Le Nouvel Observateur interview:

"What is most important to the history of the world? The Taliban or the collapse of the Soviet empire? Some stirred-up Muslims or the liberation of Central Europe and the end of the cold war?"

The U.S. thought that it had found the "silver bullet" to destroy all of its enemies and control West Asia with "stirred-up Muslims". With the illusion of such power the U.S. fed its addiction to regime change projects using Islamic mercenaries. As Brzezinski said, controlling people is difficult. The result of regime change projects has been chaos. For the U.S. chaos is an opportunity. It is of no concern for the elites that chaos costs millions of people in the world to suffer.

Today the destruction of Afghanistan, Iraq, Libya and Syria can be laid posthumously at the feet of Brzezinski. Carter has escaped public blame and he still teaches Sunday School as the Nobel Peace Prize president. Brzezinski was so good at killing millions of people that he went on to advising another Peace Prize president how to do it. President Obama called Brzezinski "one of our most outstanding thinkers". Obama picked up the killing where W. Bush left off.

Killing millions of people instead of trying to control them is the model for asymmetrical warfare. Asymmetrical warfare is when the U.S. destroys a small country that has a limited ability to defend itself and cannot strike back. The tools of the trade are the CIA, air power, missiles, drones and mercenaries.

Related Topic(s): Capitalism; Democracy; Fascism; Imperialism; Inequality; Korea; Military; Monopoly, Add Tags
Add to My Group(s)
Go To Commenting
The views expressed herein are the sole responsibility of the author and do not necessarily reflect those of this website or its editors.