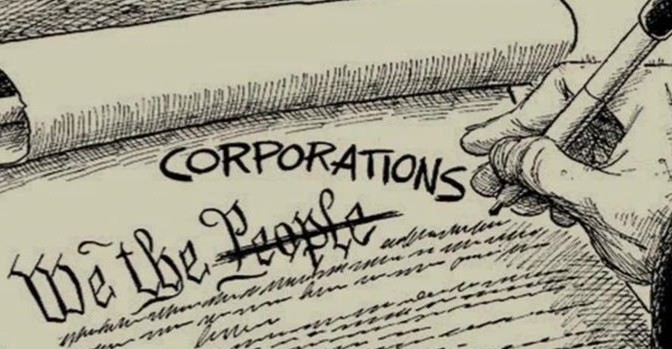 We the Corporations
(Image by Medium)   Details   DMCA

Tuesday was the tenth anniversary of the Supreme Court case that re-wrote the political landscape.

Under this ruling, the federal government is prohibited from interfering with corporations, nonprofit organizations, and unions from spending unlimited sums to support or oppose individual political candidates.

As long as they are not presenting funds to campaigns directly, corporations are free to dump as much as they want into political advertising and "super PACs" (political action committees) not required to disclose their donors' identities.

It's what former Massachusetts governor and 2012 Republican presidential nominee--now Utah Senator--Mitt Romney referred to in 2011 when he proclaimed "Corporations are people!"

But Citizens United was not the first high court decision to hand democracy to corporations.

In 2014, the McCutcheon v. FEC case further solidified Citizens United by determining unconstitutional any limits on individual contributions to federal candidate committees and national parties over a two-year period.

Thanks to these decisions, a Republican candidate with a right-wing billionaire like the Koch brothers, Mercers, or Sheldon Adelson in his or her pocket can render voters virtually superfluous.

As insurmountable as this may seem, it is possible to take back our democracy.

Consider Vt. Sen. Bernie Sanders' campaign for the 2020 Democratic nomination that has shattered fundraising records with just individual donations sans corporate influence, something most prior to his 2016 run for the White House assumed impossible in a post-Citizens United milieu.

In fact, corporate cash has become a blight on a candidate's reputation.

Related Topic(s): Citizens United; Citizens United Vs Federal Elections Commission; Corporations; Dark Money; Fundraising; Legislation; Money; Money; People; Politics, Add Tags
Add to My Group(s)
Go To Commenting
The views expressed herein are the sole responsibility of the author and do not necessarily reflect those of this website or its editors.