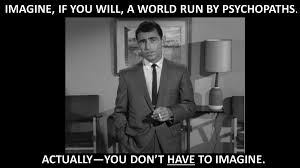 Due to a very painful and disturbing revelation in my personal life I have had the unfortunate occasion to spend the last several days thinking a lot about psychopaths and what makes them tick. I don't want to get into the hairy details at this time, but I would like to share some of the more general thoughts that have been coming up here on the matter.

It is interesting that psychopathy should have reached a dark tentacle into my life in the way that it did, given that the three years I've been at this gig have been spent writing more and more about the way our world is run by calculating manipulators who are devoid of empathy. I often say that we have found ourselves ruled by psychopaths because we have a system wherein (A) those who are willing to do anything to anyone are rewarded with immense wealth, and (B) immense wealth translates directly to immense political power. Add in the fact that studies have shown that wealth itself kills off empathy and compassion, and you've got yourself a perfect recipe for a plutocratic dystopia dominated by antisocial personality disorder.

I'm not really interested in getting into the specific clinical diagnoses of psychopathy and sociopathy for the purposes of this discussion. What I'm talking about here is a specific slice of humanity that is neurologically wired in such a way that they experience the world more as a series of puzzles which can be manipulated around to get them them whatever they want regardless of who it hurts, rather than experiencing a world full of fellow sentient beings with whom you can have deep, meaningful connections and interactions. Not all people who are diagnosed as psychopaths are high-functioning enough to manipulate people at high levels, and not everyone who manipulates people in this way would necessarily be diagnosed as a psychopath or even a sociopath. Feel free to mentally substitute whatever term you prefer.

Whatever you want to call it, people who have this condition (and are able to avoid prison) tend to do quite well for themselves by our society's standards. Because they don't see other people as anything other than tools and resources, they don't let empathy and compassion stand in their way when viciousness and exploitation will help them achieve their goals. Because they don't value connections with other people, they don't see narratives and descriptions as paths toward deeper understanding, but as tools which can be twisted and distorted in order to secure themselves more wealth, status, sex, or whatever else they want. They quickly rise to the top in corporate and financial settings, in media institutions, in government agencies, and in politics. In modern society this ability is a natural advantage that the rest of us simply cannot compete with.

Related Topic(s): Deceit; Empathy; Manipulation; Powers That Be; Psychopath; Psychopathy; Sociopathy, Add Tags
Add to My Group(s)
Go To Commenting
The views expressed herein are the sole responsibility of the author and do not necessarily reflect those of this website or its editors.