We should perhaps not blame politicians who advocate a GND without telling us how they plan to pay for it. After all, Republican politicians have been getting elected for 40 years by promising big tax cuts without saying how they would pay for them. Still, MMT is not the solution. 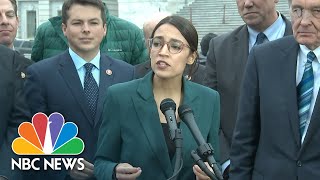 Much of the Democratic Party, including almost the entire pack of contenders for the Democratic presidential nomination, has embraced the concept of a Green New Deal (GND). This is an ambitious plan for slashing greenhouse gas emissions, while at the same time creating good-paying jobs, improving education, and reducing inequality.

At this point, the specific policies entailed by these ambitious goals are largely up for grabs, as is the question of how to pay for this agenda. One way of paying for it, borrowing from the economic doctrine know as Modern Monetary Theory (MMT), is that we don't have to.

Modern Monetary Theory argues that a government that prints its own currency is not constrained in its spending by its tax revenue. Some on the left have argued that we can just print whatever money we need to finance a GND. This claim does not make sense.

The logic of MMT's claim is that, since the US government prints its own currency, it is not constrained by revenue from taxes, or what it borrows in credit markets. It can always just print the money it needs to cover its spending.

If the government wants to spend another billion dollars paying workers to build roads or paying contractors for steel, who is going to turn down its money? They will just be happy to get the money, end of story.

The limiting factor is that, at some point, this process can lead to inflation. If an economy has a substantial amount of excess capacity, meaning that there are a large number of unemployed workers and idle factories and other facilities, the additional spending due to printing money will just put some workers and factories to use. There should still be plenty of competitive pressure to limit wage and price increases.

This was quite effectively demonstrated in the recovery from the Great Recession, in which the United States, the eurozone, and Japan have all struggled to increase their rates of inflation. In all three cases, the large-scale printing of money had a modest impact, at best, in raising the rate of inflation. The predictions of runaway inflation made by conservative economists were shown to be completely wrong.

While it's true that countries could print money to boost their economies to recover from the Great Recession, that doesn't mean that the United States could now spend a large amount of money on GND projects, without tax increases and/or offsetting spending cuts. The reason is that we have largely recovered from the Great Recession.

The unemployment rate is now under 4.0 percent, lower than it was before the Great Recession started. While there is some evidence of slack in the labor market by various measures, it has tightened to the point that workers are now seeing pay increases that exceed the rate of inflation.

The average hourly wage increased by 3.2 percent over the last year. That compares to a 2.8 percent rate of increase in the prior year, and a 2.4 percent increase from 2016 to 2017. This tightening of the labor market is great news because it means that millions more workers have jobs and that most workers are now sharing in the gains from growth.

However, it means that we are pretty much at the end of the "just print money" option. If we were to spend an additional $200 billion a year (1.0 percent of GDP) on installing solar panels and windmills, retrofitting buildings, and building electric cars and buses, it would further increase demand in the labor market and almost certainly lead to considerably more rapid wage growth.

While slightly faster wage growth would be fine, this sort of boost to demand is likely to quickly push the rate of wage growth to well over 4.0 percent or even 5.0 percent. Higher wages could come partly out of profits (there was an enormous shift from wages to profits in the Great Recession, which could be reversed), but pretty soon, substantially more rapid wage growth would be passed on in prices.

Dr. Dean Baker is a macroeconomist and Co-Director of the Center for Economic and Policy Research in Washington, D.C. He previously worked as a senior economist at the Economic Policy Institute and an assistant professor at Bucknell University. (more...)
Related Topic(s): Green New Deal; Inflation; Jobs; Monetary Policy - Advanced; Politicians; Solar; Taxes; Workers, Add Tags
Add to My Group(s)
Go To Commenting
The views expressed herein are the sole responsibility of the author and do not necessarily reflect those of this website or its editors.