(Image by Unknown Owner)   Details   DMCA
/>Every day in America, 8 children are killed by guns.
There are 4 million NRA members in this country. There are over 80 million moms, not to mention dads, aunts, uncles, grandparents, teachers and friends.
Who holds the power here?

The above photo is of my little brother Christopher, who was shot at seven years old. He survived, but is forever damaged by the violence inflicted on him. As I wrote in my article, A Single Bullet, if we offer words of consolation to victims but do nothing to change this epidemic of gun violence, we are no better than the gunman.  That's why I'm proud to announce that I'm now a volunteer with ONE MILLION MOMS AGAINST GUN VIOLENCE. I've been watching the ONE MILLION MOMS movement closely, and have been very impressed with both their message and their actions. You can become a member with one click, and help them spread their message.

Copyrighted Image? DMCA
From the ONE MILLION MOMS website:

One Million Moms for Gun Control supports the Obama administration's proposal to ban assault weapons and high-capacity ammunition clips, as well as proposed universal background checks for all gun purchasers. We call on lawmakers to also consider regulating and tracking ammunition, as there is currently no system in place to do so.


One Million Moms for Gun Control will now apply pressure to members of Congress to move quickly to pass these measures. We call on House Speaker John Boehner and Senate Majority Leader Harry Reid to bring the proposed bills to the floor for a vote in both houses of Congress, leaving partisanship aside in the interest of American families. This legislation must be passed -- not debated or diluted. We will not allow special interests to obscure the issue: the safety of America's children and families are our priority.

Today, (Saturday, January 19th) One Million Moms for Gun Control launches our new campaign "How Do You Wear Your Heart?" We want moms across the country to express their love for their children AND their demand for new gun control laws.

Decorate your heart, add yo ur child or children's names or initials, and wear it proudly. We encourage creativity: crayons, fabric, and different materials. Pin your heart over your heart and wear it publicly in support of One Million Moms for Gun Control.

We ask moms, dads, grandparents and anyone participating to take pictures of themselves wearing their pin and use those pictures as their Facebook profile. Share them with us by emailing them to Email address removed or Tweet/Instagram them using the hashtags #howdoyouwearyourheart and #1MM4GC. 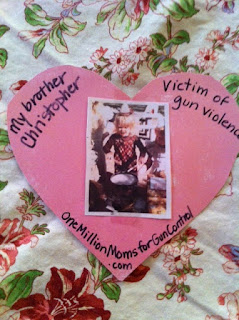 (Image by Unknown Owner)   Details   DMCA
Whether you are a mom, a dad, a friend, an aunt...please join us and stand up against this cycle of violence.

Hollye Dexter is co-editor of Dancing At the Shame Prom (Seal Press), and recently completed a second memoir, What Doesn't Kill You. Her essays have been published in anthologies and in many online publications. A singer/songwriter with four albums (more...)
Related Topic(s): America; Children; Guns, Add Tags
Add to My Group(s)
Go To Commenting
The views expressed herein are the sole responsibility of the author and do not necessarily reflect those of this website or its editors.

One Million Moms For Gun Control

Gun Violence-- Getting Up Close and Personal