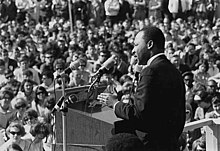 Who Am I to write about MLK Day? Others are far more qualified, like the Freedom Rider Jim Zwerg I met in Washington, DC. I told him I envied him the experience.

Like the Rev. Jesse Jackson, with whom I was also privileged to share space and interact while in DC. The aura was unlike any other I'd experienced. He was simply the most advanced person I had ever met in my life, persisting in his 24/7 activism despite a diagnosis of Parkinson's disease.

Or like Rep. John Lewis, whose book signing I attended. Shaking hands with him was like the same experience I didn't have with the Rev. King but of course would have wanted. Rev. King came alive for me at that moment.

As a high school senior in Atlanta, a hugely bigoted place back then, I glimpsed Rev. King and his wife Coretta Scott King at a department store in Lenox Square. I was dressed in the uniform of a school that had not accepted Dr. King's son's application there, but didn't consider that as I did a double take and gawked in amazement. "Hi," said Ms. Scott breezily. I couldn't move for a while, so amazed.

And I again might have shared space with Ms. Scott at the 40th anniversary rally celebrating Rev. King's I Have a Dream speech in front of the Lincoln Memorial. Only I misread my stage pass as a press pass and promptly climbed the scaffolding with the rest of my colleagues. I did achieve some authentic photography that I'll look for to accompany this story! (The only photo I could find was of the Lincoln Memorial that day at sunset, which I was unable to upload!)

Ultimately, I can write about MLK Day as a witness to rank racism during my childhood and actually throughout my life. And as someone who has achieved dreams as well as fallen short of them. And as someone bitterly disappointed that chances are large that I'll leave this world in far worse condition than the one I was born into. Rev. King died bitterly opposed to the Vietnam War, still battling racism, specifically in Memphis but in reality everywhere in some form or another.

But it seems to me that the greatest tribute I can pay to Dr. King is to reprint my account of the fortieth anniversary tribute to his "I Have a Dream" speech, published in the September 2003 issue of my then hardcopy monthly potpourri Words, UnLtd. (Now a webpage at wordsunltd.com.)

Related Topic(s): Heroes; Justice; Peace; Persecution; Racism; Rally; Rights; Segregation; Tribute, Add Tags
Add to My Group(s)
Go To Commenting
The views expressed herein are the sole responsibility of the author and do not necessarily reflect those of this website or its editors.

Other Series: View All 85 Articles in "The Capitol Beat"