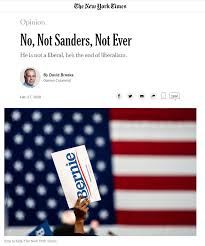 I have to be honest. In this election season, with all the attacks on Bernie, the support of "liberal" centrism, and defense of the status quo, I can't help feeling discouraged almost depressed.

My most recent source of near despair was a New York Times op-ed last Thursday by conservative columnist David Brooks. The piece was called "No, Not Sanders, Not Ever."

Despite authorship by a conservative, it pretended to voice sympathetically the so-called "liberal" wisdom that Brooks claimed should prevail among Democrats. (Don't you just love it when reactionaries instruct liberals on how to be liberal and win elections?)

To begin with, Brooks openly red-baited the Senator from Vermont. He brazenly associated him with the Soviet Union's slaughter of 20 million people, with mass executions and intentional famines. He connected Bernie with slavery, Cuba, Nicaragua, communism, Nazism, and Trumpian populism.

Meanwhile, he praised Hubert Humphrey, Ted Kennedy, and Elizabeth Warren, because as true liberals, they "worked within the system, negotiated and practiced the art of politics." He heaped similar accolades on F.D.R. who unlike Sanders "did not think America was a force for ill in world affairs." None of the above, Brooks said not Humphrey, Kennedy, Warren or Franklin Roosevelt thought or thinks that "the whole system is irredeemably corrupt."

However, while reading Brooks' attacks, I couldn't help thinking: but what if Senator Sanders is right? What if the entire system is beyond the pale and liberalism simply doesn't work? What if political opponents in the party of Trump and McConnell ensure that it doesn't work by absolutely refusing to cooperate with Brooks' liberals (as he put it) "in the traditional way: building coalitions, working within the constitutional system and crafting the sort of compromises you need in a complex, pluralistic society?" What if (as I've suggested elsewhere) the entire system been successfully seized in a coup d'e'tat by nihilists, mobsters, pedophiles, and blackmailers by the Republican Party which Noam Chomsky has identified as the most dangerous organization in the history of the world?

Finally, what if such suspicions about complete systemic breakdown are confirmed by the evidence including:

Doesn't all of that (and so much more) describe a system that actually is irredeemable aside from complete revolution?

What I'm suggesting is that the Brooks piece and the evidence just advanced show how everything seems stacked against the naïve liberalism Brooks favors. Instead, the country's condition cries out for radical reform. "America" has become a place where the injustices just listed seem baked into the structures of our lives. And the baking process involves laws that increasingly serve the elite and punish the rest of us. (In fact, isn't that what laws are? They are largely products of the rich and powerful concocted to ensure that they remain rich and powerful.) All of us should be angry about all of that. If not, we're probably not paying attention.

When Bernie says the system is corrupt, that's what he means. The changes required to make it less corrupt are common sense and involve structural and legal changes that would embody measures far more profound than even the Vermont senator proposes. I'm talking about small-"d" democratic steps such as the following:

Now those steps are truly radical. They go to the heart of the matter which is lack of democracy here in the United States. Their mere listing reveals not only the corruption of the present system, but the deep law-enforced entrenchment of corporate power exercised by the nation's rich and powerful.

No, Mr. Brooks, Bernie Sanders is not a dangerous man. And yes, absent his nomination, it will remain true that "the whole system is irredeemably corrupt."

Bernie Sanders is actually quite moderate. The "remorseless class war" he addresses is a fact of life initiated by the 1%, not by Bernie. However, he represents a decisive step towards winning that war.

Related Topic(s): Conservatives; Corporations; David Brooks; Democracy; Democrats; Election; Elections; Liberalism; Liberals; McConnell-Mitch; (more...) Reform; Sanders-Bernard; Trump, Add Tags  (less...)
Add to My Group(s)
Go To Commenting
The views expressed herein are the sole responsibility of the author and do not necessarily reflect those of this website or its editors.